Home » Film » Up and Downey 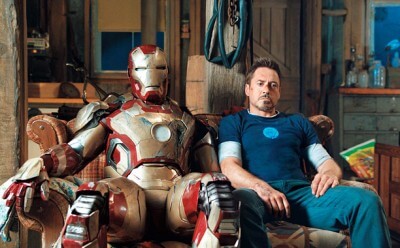 Although traditionally necessary for filmmaking, the original Iron Man was rumored not to have had much of a real script, just an outline of key moments and the note “fill in gaps with Robert Downey Jr’s swag.” Much to the chagrin of the WGA, it worked. But writers’ karma is a harsh mistress, and Iron Man 2’s attempt to “wing it” soared like a penguin. Enter writer/director Shane Black, known for pulpy, quick dialogue, tons of complex action sequences and copious F-bombs; two out of three of those traits are enough to make Iron Man 3 the best of shellhead’s series.

Co-screenwriter Drew Pearce and Black have done the unthinkable; they created a character-based superhero movie that isn’t about the superhero not wanting to be a superhero. Gasp! Instead, this is an exploration of vainglorious personal identity, with Tony Stark (Downey Jr) reconciling feuding public personas. The central question is whether genius Stark is synonymous with Iron Man or somehow seen as materially separate, more like Iron Man’s mechanic. It is a unique thematic consideration mirroring universal doubts, including “do I own my stuff or does my stuff own me?” or “does everyone see me as I see myself?”

The plot contains a whopper of a twist that fundamentally alters the now-traditional sequel format; so it’s a super spoiler. But here’s what you can know: After The Avengers, Stark is having panic attacks, relieved only by building suit after new suit. When a shadowy figure from his past, Aldrich Killian (Guy Pearce) tries to get money from Stark Industries, run by his gal Pepper Potts (Gwyneth Paltrow), things get ugly. While this is going on, The Mandarin (Ben Kingsley) claims responsibility for a series of global bombings, one of which hurts Stark’s buddy Happy Hogan (Jon Favreau), drawing him into the conflict. Even with armored ally Iron Patriot (Don Cheadle), Stark is facing tall odds, considering the legion of indestructible enhanced humans he’s also facing.

The wicked action set-pieces are deliciously chaotic, with Black and Pearce figuring out a way to up the carnage within PG-13 bounds: have remote controlled suits face bad guys who can’t die. The star here (beyond Downey) is the script, which calls a time out halfway through to let Stark buddy up with an adolescent boy (Ty Simpkins) for 45 minutes, which shouldn’t work but totally does. Why? Because it helps rekindle Stark’s character-defining, vain sense of humor and plays off of an inversion of superhero sequel tropes: Stark isn’t considering quitting Iron Man, he can only maintain calm inside the armor.

Promos have been grim; the movie is not. It’s frequently hilarious and constantly obsessed with deconstructing tired cliches. For example, without revealing anything, Pepper’s role in the final act is Black’s huge “eff you” to the traditional behaviors of cinematic superhero girlfriends. Finally! Iron Man 3 isn’t angling for a Best Picture nod like The Dark Knight series. It just wants to be a comic book movie with brains. And it is. Basically, putting Black on Iron Man put Iron Man back in the black.