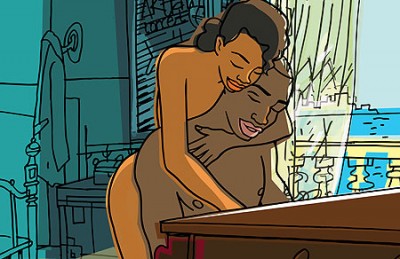 In America, the term “adult animation” still conjures up images of inappropriate drawings, an alarming genre enjoyed by a thankfully small subgroup of the human race. But for the rest of the world, cartoons are more than just a way to sell Happy Meal tie-ins. As France showed with Persepolis and Israel demonstrated with Waltz With Bashir, the limitless potential of animation dismantles budget concerns and opens the door to imaginative ways to tell very grown-up stories.

This is a fancy way to tell you that Chico and Rita has cartoon boobies in it.

Written by Ignacio Martínez de Pisón and Fernando Trueba, who was also part of the directing team with Tono Errando and Javier Mariscal, Chico and Rita scored a huge coup when it kicked Steven Spielberg right in the Oscars, snatching an expected nomination at this year’s awards away from The Adventures of Tintin. Spanning 60 years, the film is a hand-drawn love story that actually has much in common with best picture winner The Artist; there’s even a tiny dog that factors in.

Chico (voiced by Eman Xor Oña) is a wicked good piano player living in Cuba in 1948. He spends his free time banging blondes from the states, but Yankee girls are just a way to pass his time. By contrast, Rita (voiced by LImara Meneses) is the kind of girl a life can be defined by. After he happens to catch her singing, Chico becomes obsessed with the curvy, big-voiced beauty, and she too feels the Havana heat. The duo pair up musically and carnally, until Rita discovers that Chico is a musical man whore.

Thus begins decades of near-misses for true love. The pair reunites and wins a contest that brings them moderate fame, only to be split up when Rita is offered a chance to go to New York and be famous. Chico chases her abroad and they reunite, only to be split up by a nasty businessman who gets Chico deported. It goes boff, break-up, repeat.

With a backdrop of racial issues that are never fully or seamlessly incorporated into the story proper, most notably when Rita gives a weird rant on stage about her mistreatment that seems to come out of nowhere, the movie is somewhat frustratingly set in very interesting times but does little that’s actually interesting. For example, Dizzy Gillespie appears, but is pretty much ignored. The same goes for the way the film barely pauses to acknowledge how Cuba shifted from a decadent near-paradise to a broken-down slum.

Still, the core of the film is honest and sincere; contrast this animated love story between a man and a woman caught in the grips of fame with the one featured in The Artist, and you’ll swear this two-dimensional animation had more three-dimensional characters. While it fails to fire on all cylinders, it sports a gobstoppingly toe-tapping soundtrack and enough cartoon passion to justify consuming its slight running time. Even if it misses a few beats, Chico and Rita more than keeps the rhythm and our interest.