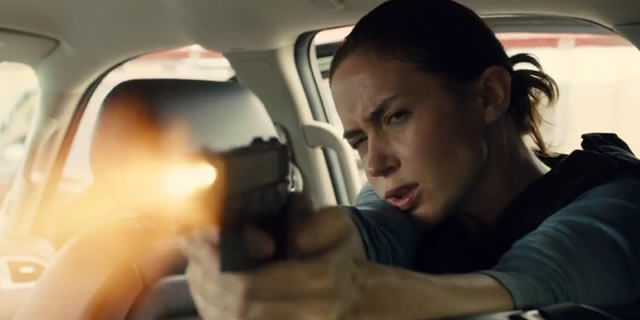 Nobody show Donald Trump Sicario! Already willing to xenophobically cast ignorant shade on entire groups of people, director Denis Villeneuve and writer Taylor Sheridan’s film reads like Captain Floppy-head’s personal vision of what all of Mexico is like. If his campaign platform is a trucker hat, it’s conceivable his foreign policy could be based on a fictional movie. So he’s not allowed to watch.

For the rest of us, Sicario is a grim, joyless descent into the unspeakable evil it takes to stop unspeakable evil. Emily Blunt plays Kate Macer, an FBI agent who opens the film still possessed of her soul and the belief good exists in the world. When Department of Defense “consultants” Matt Graver (Josh Brolin) and Alejandro (Benicio Del Toro) take Kate on their anti-drug cartel team, she quickly realizes that Juarez is so horrifyingly grotesque, denizens of hell would respond “No thanks. We’ll stay here.”

The team’s objective is to flush one of the cartel’s American bosses back to a meeting with the head honcho back in Mexico, thereby gaining his location. They do this through a little bit of torture, a tiny bit of police work and a whole lot of lying. Kate grows increasingly more concerned at the naked illegality of it all, but is forced at every turn to admit the alternative is to let the druglords do whatever they want.

Sicario is a film with scores of mutilated bodies, one physical rape, one mental rape and absolutely nothing happy. It was surprising to find out the word “sicario” translates to “hitman” and not “abandon all hope ye who enter here.” It’s almost certain that part of Villeneuve’s intent was to shove the scope of what’s actually going on to our south down audiences’ throat like so much waterboarding. It doesn’t make for a pleasant experience per se, but the point gets driven home. I can’t remember a movie that contained a scene of at least a half dozen law enforcement agents simultaneously retching over human remains.

What makes Sicario is the work of its leads. Blunt’s Kate isn’t some doe-eyed optimist or sultry neophyte. She’s a battle-hardened quick study who isn’t confused by what unfolds so much as she is horrified by what’s being asked of her. In a way, the entire film is a torturous symbolic rape of her morality, decency and belief in the virtue of her profession. Meanwhile, Del Toro’s Alejandro is the rarest of all movie tropes: the bad guy fighting on the good side who actually is very, very bad. Most often, these figures are “hitmen with a heart of gold.” Alejandro does not have a heart. Not anymore. And his willingness to repeatedly “go there” makes every scene palpably tense.

Sicario is often a hard watch and intentionally uncomfortable in a way that is forgivable thanks to the reality of its subject matter. It is not a “taut action thriller” as has been touted, so much as it is a “bleak tragic thriller” worth crossing borders for.