Home » Film » Just Get it Over With 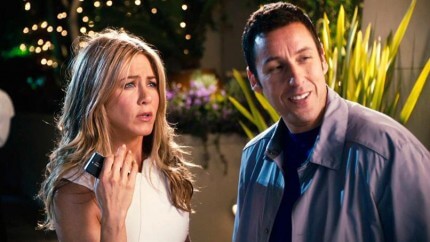 Just Go With It is the latest Dennis Dugan–directed Adam Sandler vehicle. Standing at the ticket counter, the title reads more like a desperate plea for audience members. That probably isn’t the case, since it was basically designed to make lots of money. But it’s such a benign and unnecessary movie that it’s nice to imagine.

It takes a while to get to the meat of things, but the idea is this: Sandler plays a plastic surgeon named Danny who wears a wedding ring to get younger girls. Palmer (Brooklyn Decker) is young enough to still be mourning the death of N’Sync, but Danny somehow ends up “connecting” with her when they meet at a party. When she finds his wedding ring prop, he has to fabricate a failed marriage in order to keep her around.

To play his faux ex-wife, Danny enlists the help of his loyal assistant Katherine (Jennifer Aniston). Things get out of control (don’t they always?), and Danny finds himself in Hawaii, fumbling to keep his fake family together long enough for Palmer to finally trust him.

It very quickly becomes evident that we’re watching little more than the story of man trying to pick which hot girl he wants to marry. Comedies like this don’t need to be profound or insightful, but why do they have to be so dumb?

There are, surprisingly, some genuinely funny moments. Most of them involve Sandler and Aniston in conversation, scenes that feel remarkably breezy and loose. If not improvised on camera, they feel like they could have been. And besides being simply funny, they make you think that maybe Sandler still has something to give comedy-wise.

These scenes shine pretty brightly, but there are just too few of them. The rest of the movie is populated with the usual lows of this kind of comedy: chronically juvenile taste peppered with painfully few bits of real wit, a half-baked concept of women and copious crotch shots.

As the director of several other popular Sandler comedies, Dugan at least deserves a hand for being so unapologetic in his continued attempts to amuse the masses. If not a noble ambition, it is a relatively harmless one. And fortunately for him and Sandler, Just Go With It is probably just amusing enough to make a few bucks.