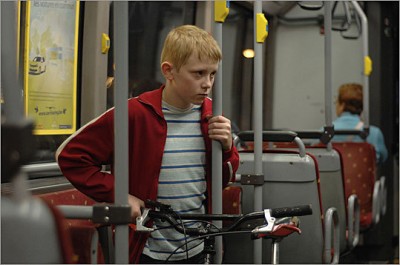 In what is essentially Oliver French Twist, writers/directors Jean-Pierre Dardenne and Luc Dardenne definitively prove that life in France is more than just croissant-eating and Muslim-hating. In soul-crushing fashion, this muted tale of an unwanted, unloved boy is simultaneously gripping and dull. It’s hard to pull off such a dichotomy, but these are a people who turned Jerry Lewis from clown to God and frogs from potential prince to food.

When the lead of a movie is a child actor, the whole film pivots around that central casting. Don’t believe me? Ask Star Wars fans about Jake Lloyd, the actor who played young Anakin Skywalker. The only reason he hasn’t been mauled to death by nerds in full Stormtrooper riot gear is because Jar-Jar Binks exists. See, he was good for something after all!

Luckily, Thomas Doret, who plays the troubled tween Cyril, isn’t just serviceable, he’s damn near a revelation. With a stunning amount of nuance, the boy is neither a woebegone misfit nor a malicious punk. He’s simply a kid who life just continues to crap on. His dad (Jérémie Renier) doesn’t want him. His bike, literally the only thing he loves, was sold. And after a kind woman (Cécile De France) graciously agrees to take him on weekends, giving him a break from his state-run youth farm, he foolishly believes he makes a friend (Egon Di Mateo) only to find that he was being conned into committing a crime. And then people throw rocks at him for good measure.

The Kid with a Bike isn’t a movie about what happens but how what happens makes you feel. Bad. You will feel bad. The simplicity of this singular emotion somewhat betrays the truly artful work of all parties involved. Empathy and pity are commodities easily traded with great frequency. Cyril’s plight is instantly sympathetic, leaving the audience to simply endure the emotional slings and arrows he suffers. Unlike in Fish Tank, a similar British film (albeit one with substantially more Michael Fassbender inappropriate teen sex), the main character’s struggles aren’t terribly weighty. They’re just sad.

Watching a dad tell a kid he doesn’t want him anymore is an emotional nutshot, but to what effect? Really, that’s the fundamental problem with The Kid with a Bike. We never find out enough about the other characters, like Samantha the good samaritan, to connect with them, leaving us tethered only to Cyril. And although he grows through the course of the film from a lost boy capable of lashing out at others to a somewhat-found boy who tries not to lash out at others, it isn’t a heady transformation so much as a minor paradigm shift.

This is a well-made, well-acted film that is emotionally evocative and intellectually non-stimulating. Although Cyril’s decision-making results in sporadic moments of tension, the unassuming title wasn’t chosen by accident. Had they gone with Sad Kid with a Bike, the entire experience would have fit on just the marquee.