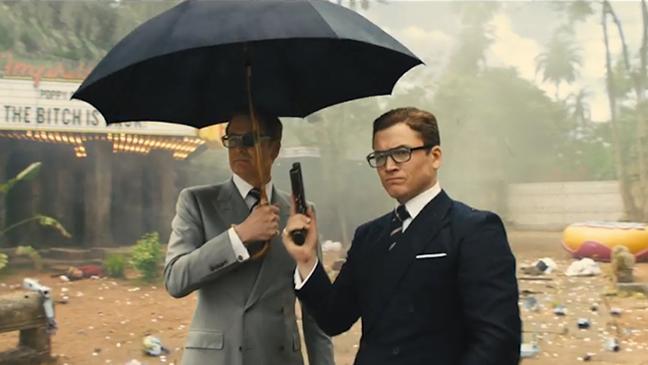 When done well, a movie that simultaneously exists as a certain thing while satirizing that same thing resembles a Mobius strip, a tantalizing narrative pretzel that obscures where the entertainment ends and the commentary begins. When done half-assed, Elton John kicks an evil henchman in the face while Julianne Moore cries with her eyes behind her signature smile. Of all the things it set out to be, Kingsman: The Golden Circle should have started with “good.” Mediocre and weird, the film is regressive at the precise spots when it thinks itself progressive, dumb exactly when it thinks itself clever and blissfully entertaining when it forgets itself entirely.

For a would-be franchise aspiring for free-spirited adventures, The Golden Circle is mind-bogglingly dependent on the events of the first film. Without any reintroduction, Eggsy (Taron Egerton), the British-street-tough-turned-millennial-007, immediately gets roughed up by a somewhat minor character from the first film, Charlie (Edward Holcroft), who had previously appeared to be super dead. Not-dead Charlie is working for Poppy (Moore), an international drug kingpin who has somehow poisoned the entirety of the world’s illegal narcotic supply and threatens to kill the millions now infected.

To facilitate her nefarious nefarious-izing, Poppy kills all the Kingsman spies, including the only woman from the first movie that Eggsy didn’t have anal sex with. The survivors of the purge, Merlin (Mark Strong) and Eggsy, head to U.S. and call upon The Statesman, which is the American version of the Kingsman spy operation. The Statesman spies stealthily hide by being mostly comprised of cameos. Head honcho, Champ (Jeff Bridges); head bad-ass, Tequila (Channing Tatum); and head tech person, Ginger Ale (Halle Berry), appear exactly as long as contractually obligated. Also, Harry Hart (Colin Firth), who was Eggsy’s mentor in the first movie, is resurrected for no good reason, there’s a weird Burt Reynolds cosplayer named Whiskey (Pedro Pascal) and tons of other convoluted impediments to enjoyment.

The Golden Circle can be fun, but only when writer/director Matthew Vaughn and cowriter Jane Goldman stop barfing plot complications and borking their alleged skewering of James Bond. Every action set-piece is hella purty, as the camera slips and slides over, around and through the combatants. And you’d think watching Colin Firth kick ass would be old hat by now, but watching him pride the prejudice out of thugs is still giddy goodness.

What derails things is the film’s treatment of women, which furiously vacillates between stunningly dismissive and “ew, gross.” Roxy (Sophie Cookson), Eggy’s platonic buddy from the first film, is killed off so flippantly, she’s more “mini-fridged” than “fridged.” Princess Tilde (Hanna Alström), who was seemingly returned only to absolve the filmmakers for making her a one-note butt sex joke last time, is fleshed out into a more complete character, only to be returned to comedy prop. Worst of all, the camerawork on a sequence where Eggsy simply must place a tracking device in a villainess’s vagina is so heinous, Martin Shrkeli complained that it made him uncomfortable.