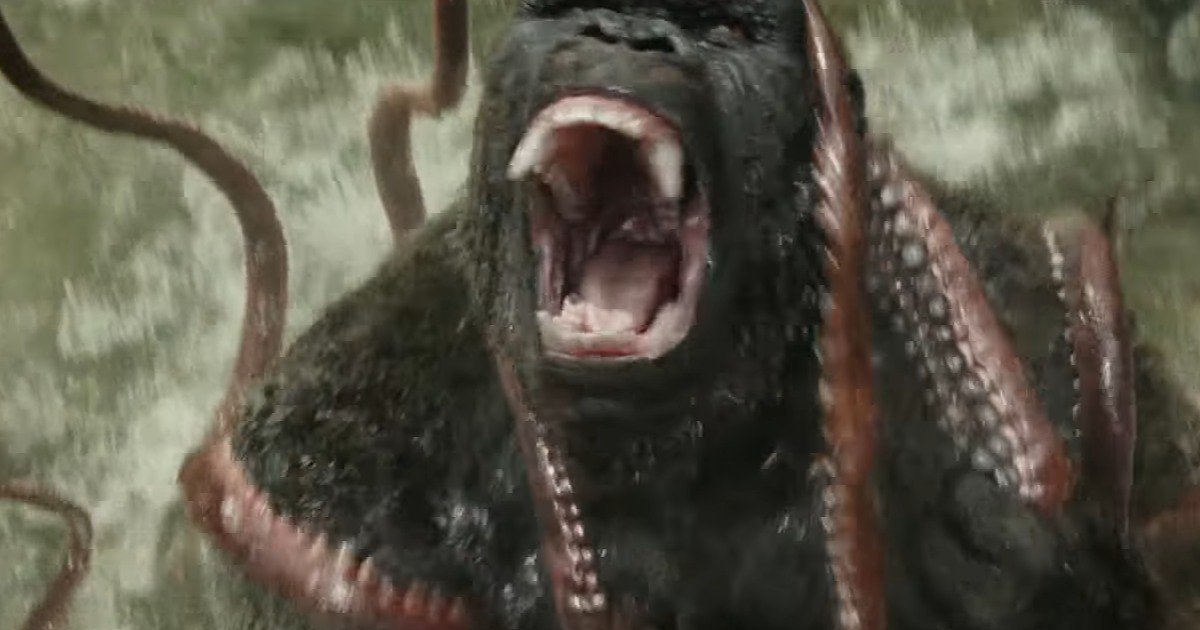 In spurts, Kong: Skull Island is the whacked-out, gleeful nonsense director Jordan Vogt-Roberts clearly longed to make. Straight-jacketed by a studio determined to craft a broad-demographic-appealing “shared universe” using their giant monster characters, Vogt-Roberts still managed to work in a high-quality sequence of Tom Hiddleston chopping pterodactyls in half with a friggin’ sword and maybe the best single-use F-bomb in PG-13 movie history. To his credit, none of the boilerplate big-budget content is particularly bad, it just prevents Skull Island from mutating into the quirky, batshit-insane joyride it could have been.

Showing that it is clearly a work of fiction, Skull Island begins with a sitting U.S. Congressman actually concerned about Russia. Bill Randa (John Goodman), an executive with a government contractor, and his colleague, Houston Brooks (Corey Hawkins), convince said congressman to commission a military expedition to an uncharted island before the Russkies get there. The leader of that military expedition is Preston Packard (Samuel L. Jackson). The Vietnam War has literally just ended, and Packard is hella pissed his boys seemingly died for nothing. He’s basically one angry Ahab in search of a Moby Dick to harpoon.

Randa and Brooks hire a “tracker” named James Conrad (Tom Hiddleston), whose name is such a direct reference to Joseph Conrad that his name may as well have been “Mr. Heart of Darkness.” Photographer Mason Weaver (Brie Larson) also joins, presumably because all winners of the Best Actress Oscar are contractually obligated to immediately appear in a movie that wastes their talents. The ragtag group arrives on the island to find giant spiders, dinosaur-lizard thingies, King Kong and John C. Reilly. Kong may get top billing, but Reilly’s marooned World War II veteran is easily the star here, spouting gibberish and being utterly G.D. fabulous.

A friend described the film perfectly: Skull Island is like eating a buffet of great individual dishes that never comes together into one coherent meal. A diagnostic report may fail to find a single component that outright fails. Kong looks great and finally gets treated like the bad-ass warrior hero he is. Reilly is uniquely brilliant comic relief. The soldiers are all distinct without being distracting. The monster fights are epic and kinetic. And coming off of Logan, naming a character Conrad and aping Heart of Darkness/Apocalypse Now in every other scene now feels like a positively restrained homage.

And yet, the film never gets to put its cuckoo cap all the way on. Scenes like the one where Hiddleston goes HAM, where Reilly randomly threatens to stab a friend while giggling or where a soldier’s heroic self-sacrifice does not go heroically are understandably and appropriately where Vogt-Roberts’ heart is. Instead of more wacky mayhem like that, Skull Island simply follows a fairly banal blockbuster pattern, focusing acutely on getting to the moment shown in the credit cookie. To be fair, it’s one hell of a monster cookie, even if what came before was slightly overbaked and somewhat underwhelming.