Home » Film » Let the Answering Machine Get It 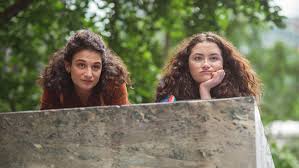 “Meh” films are always the hardest to review because I have to figure out creative ways to somehow flesh out an unimpressed shoulder shrug into an entire article. I didn’t like Landline. I also didn’t dislike Landline. It wasn’t a particularly funny. It wasn’t particularly unfunny. It simply came and it went. It happened. It’s hard to say if I’ll even remember writing this review in a few weeks. If you’re a fan of writer/director Gillian Robespierre and actress Jenny Slate, then Landline is worth checking out just to see new, inoffensive content from the duo behind 2014’s Obvious Child, one of my favorite comedies ever.

Landline is set in New York City in 1995, for apparently no other reason than the film’s semi-autobiographical feel suggests similar events occurred to one of the screenwriters during that year. Except for a few characters mentioning the year 1995, I actually kept forgetting the film is a period piece. Oh yeah—you do see a floppy disk, though. The arbitrary setting isn’t a huge deal but is certainly emblematic of the same problem I see in so many semi-autobiographical comedies. Landline seems way too concerned with staying true to actual events and the narrative gets messy.

It would have been nice to see Landline trim the fat and really flesh out just a couple of these subplots. Instead, it tries to navigate a dozen and spreads itself too thinly. Although I’m sure this stuff mattered when it actually happened to the screenwriter, they don’t gel as a story.

Having said all that, Landline at least holds your attention while you’re watching it. I chuckled every few minutes although none of the jokes evoked belly laughs. Every actor does a fine job, especially relative newcomer Quinn who is the only distinctly memorable part of the film. Landline isn’t a film you should avoid at all costs but I just didn’t quite dig it enough to recommend.