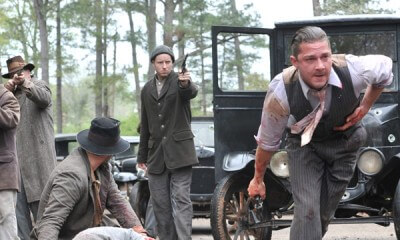 Scuff him, scrape him, buff him up; nobody is going to buy Shia LaBeouf as a country boy. He has a face built for Instagram and his posture is that of a narcissist demanding bottle service at a trendy club. Even though he plays the least burly of the Bondurant boys, a real life trio of brothers who ran moonshine during prohibition, nobody is buying what he is desperately giving away. Thus, it’s a minor miracle that Lawless mostly works anyway.

Set in 1930s Virginia, Lawless is kind of a redneck fairy tale: three boys thumb their nose at the law, get rich off the land and love the hell out of their kin. The leader of the pack is Forrest (Tom Hardy), an unassuming mountain of a man who prefers grunting to speaking. He and his brothers, Jack (LaBeouf) and Howard (Jason Clarke), have become legends in Franklin County, as rumor has it they can’t be killed. Willing to put that legend to the test is Special Deputy Charlie Rakes (Guy Pearce), brought from Chicago to bust moonshining heads (or at least muscle in on their action). When Forrest won’t give Rakes a taste, it becomes a war, with Jack’s young love interest, Bertha (Mia Wasikowska), and Forrest’s lady friend, Maggie (Jessica Chastain), caught in the crossfire.

Lawless eventually settles just outside of great, having blown past “acceptable” and “decent” before finally taking up residence in “pretty good.” Director John Hillcoat and writer Nick Cave (yes, that Nick Cave) managed something akin to a “noir western.” It’s Chinatown by way of the pony express. Hardy is the glue that holds this semi-mess together, with Pearce shaving his eyebrows and slicking his hair into demented cartoonish villainhood that is eminently watchable. Oh, and dames don’t come more troubled or tempting than Chastain’s Maggie, a redhead poured into dresses that pop with color against a sufferingly bland background.

And it all almost adds up, but it’s just a little Shia of perfect. LaBeouf’s performance is tone deaf, not enough time is spent with the most interesting characters (Forrest and Maggie) and huge subplots are dropped like a hot pistol. Gary Oldman plays a tommy gun-toting mobster…for like two scenes. The Blu-Ray will inevitably feature the entirety of his aborted storyline. While Hillcoat does have an eye for revolver and shotgun-based action and sparse scenery, but it’s outweighed by his bloodlust. His first film, The Proposition, had more blood in the mud than can almost be imagined, so Lawless may feel like he’s taking it down a notch. Still, throats are opened, neck growths are popped and Forrest’s brass knuckles sure do crack a lot.

There are moments when Lawless is almost thrilling, when it is definitely well acted (as in, whenever Chastain is on screen) and when it comes close to feeling complete. Maybe one more draft of the script (keep making music, Mr. Cave), one more round of edits (come on, Mr. Hillcoat) or one different actor in a key role (exit stage left, Mr. LaBeouf) we’d be talking about Lawless as a summer surprise and not a near miss.