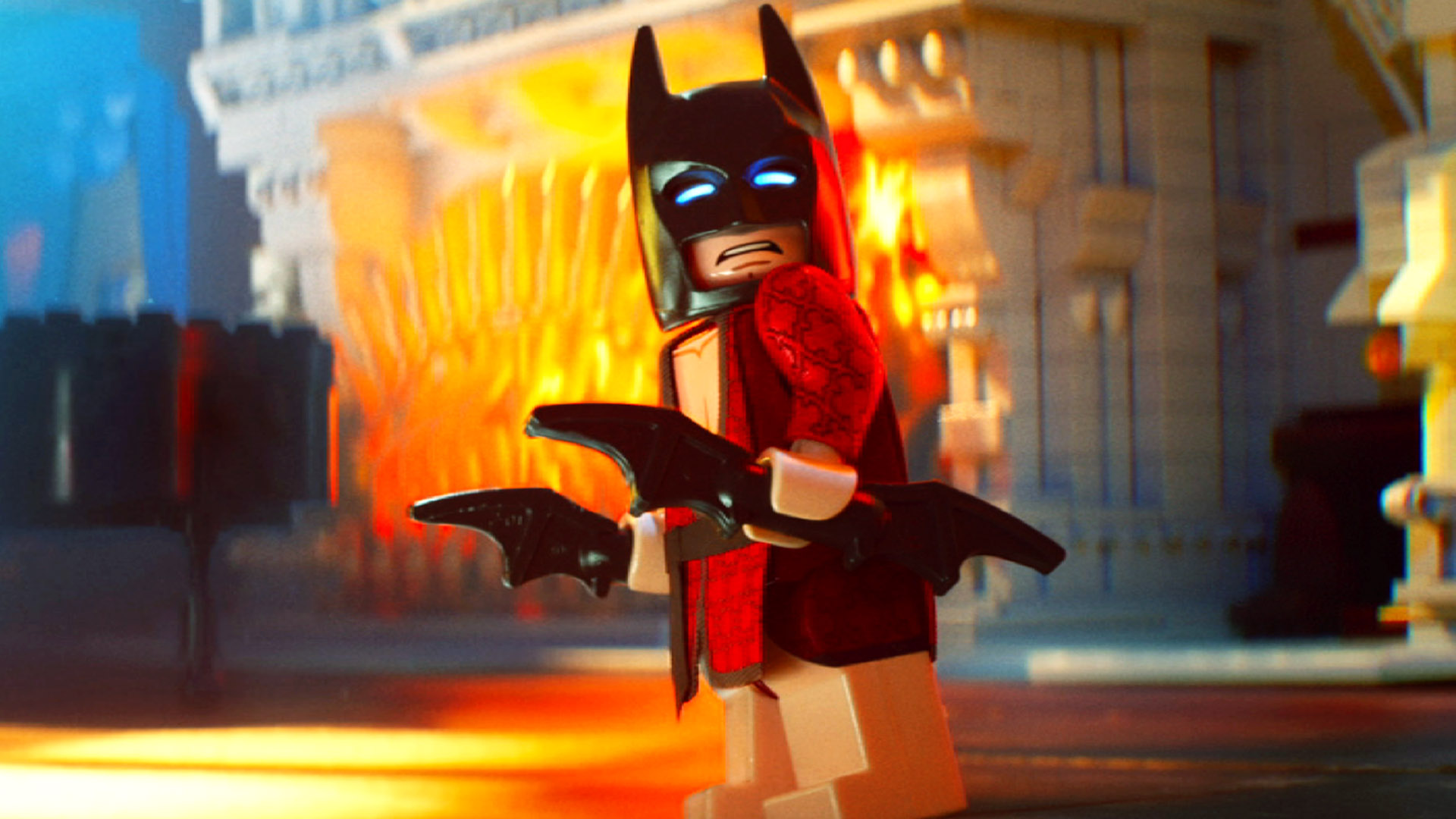 Forget “Don’t Tread on Me.” If Americans really wanted a flag that captures our collective mentality, it would be a morbidly obese snake with the words “If Some Is Good, More Is Better” written beneath it in crayon. Lego Batman takes a hilarious minor figure from The Lego Movie and attempts to compose an entire cinematic overture with a one-note character. Repetitive, noisy but not outright unpleasant, the experience is like listening to a pretty funny friend tell a bunch of knock-knock jokes during a rave.

The joke—and that is joke in the singular form—inherent in the character of this version of Batman (Will Arnett) is that he’s super cool but also very lonely. Lego Batman makes The Fast and Furious franchise’s rabid, slobbering emphasis on the “importance of family” seem positively nuanced. Alfred (Ralph Fiennes), Batman’s long-suffering surrogate father figure, flogs his pseudo-son and the audience with anti-loneliness moralizing to the point where anyone watching the film by themselves may need a suicide hotline.

Batman accidentally adopts Dick Grayson (Michael Cera) and butts plastic heads with the new police commissioner, Barbara Gordon (Rosario Dawson). Meanwhile, the Joker (Zach Galifianakis) is totes butthurt because Batman doesn’t consider the pair to be “arch enemies.” This leads the Clown Prince of Crime to act out like a spurned teenager, pouting for attention and throwing tantrums. This is the sum total of plot that the five credited writers decided was necessary. Presumably, everyone spent most of their time working in as many obvious Batman Easter eggs and Robin’s underpants jokes as possible.

More than anything, Lego Batman is visual chaos. What had felt like innovative animation in The Lego Movie plays like spastic gibberish this time out, with several action sequences almost completely incomprehensible. Maybe the creative team found a way to speak in a hyperkinetic, sugar-injection-to-the-eyeball language only young people can speak? Mostly, it looked like someone put loosely connected Legos on a playground roundabout and a real strong kid spun it until there were pieces everywhere.

The jokes that land consist solely of Bat-references and goofy business from the Joker’s gang of malcontents. Considering that the likes of Jenny Slate, Doug Benson, Jason Mantzoukas, Kate Micucci, Riki Lindhome and Conan O’Brien voice the rogues gallery, the biggest surprise is how little they appear. Ditto on the use of fellow superheroes like Superman (Channing Tatum) and Green Lantern (Jonah Hill). The climactic sequence that sees Harry Potter’s Voldemort (Eddie Izzard) and The Lord of the Rings’ Sauron (Jermaine Clement) added to the fray—along with the always-welcome Daleks from “Doctor Who”—is the only bit to fully embrace the creative freedoms afforded the franchise.

This has been called the “best Batman on screen ever.” It isn’t. It’s been called a “worthy successor” to The Lego Movie. Nope. What it can be called is “mostly pleasant” or “mildly amusing,” which doesn’t sound as good in trailers or on posters. If the Lego series hopes to have staying power, and yet another upcoming spinoff this year sure makes it look like that’s the dream, maybe lay off the simplistic moralizing and epilepsy-inducing visuals?