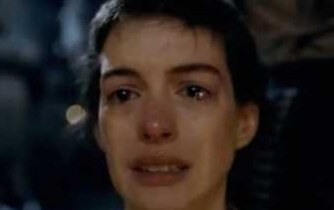 Two minutes in: You can do this, Ryan. Sure, a three-hour film version of a Broadway musical is a dry way to waterboard you, but people say Les Misérables is the best adaptation yet. Maybe this is the one that finally changes your mind.

Five minutes in: No. No, It isn’t. This is hell. This is my personal hell.

Twenty minutes in: If anyone finds this message, please get word to director Tom Hooper that there’s a fine line between an extreme close-up and invasive surgery; if I see any further up Hugh Jackman’s nose, I’ll see his thoughts.

Twenty five minutes in: Man, Jean Valjean (Jackman) did a 20-year bid for stealing bread and gets life-long probation. The French take croissants pretty seriously, huh? Hey, if I can already pick up on how this narrative theme is a simple contrast between Javert (Russell Crowe), the absolutist, and Valjean, the “changed man,” reflecting the potential of France herself to change, do I have to stay all the way until the end?

Forty minutes in: Holy goblin face, Hooper! What demonic camera lens from hell did you use to turn Anne Hathaway into a grotesque, mutant, bat-boy monster? Still, she is acting her corseted booty off, and her singing is pretty dope. You know, maybe I’ll like this movie after all!

Forty-two minutes in: SHE’S DEAD? HOW? What did she die of? Prostitution isn’t fatal or we’d be reading Kim Kardashian’s eulogy by now.

An hour in: Why is there no French Revolution in this French Revolution movie? And why don’t these characters just talk instead of sing, at least sometimes? I’ve seen them do it! So unless there’s some kind of gypsy curse put on them by the cast of “Glee,” they should be able to stop talk-singing and just talk-talk. I mean, for God’s sake it doesn’t even rhyme or have a discernible cadence!

An hour and fifteen minutes in: Abandon all hope! The corpse of Helena Bonham Carter has been dredged up and reanimated as a bloated clown walrus, and Sacha Baron Cohen keeps poking at her like her pasty boobs are mini-pinatas. Oh, and Valjean talked to Fantine (Hathaway) once in his life and now he’s raising her kid? 18 years, am I right Kanye?

An hour and forty five minutes in: Hooper, the way you and your cinematographer-on-loan-from-filming-colonoscopies shot Amanda Seyfried means I can’t buy that Marius (Eddie Redmayne) would love her upon first sight; she looks like a mouse that got into hydrochloric acid. Also, Marius sings like he’s doing a Kermit the frog impression.

Two hours to two and a half hours in: Cold…so very cold now. I didn’t understand how people in this movie just up and died, but I get it now. It’s the singing. The singing never stops. It. Just. Never. Stops. And the camera keeps getting closer and closer and… Eff it, I’m going towards the light. I feel you, Javert. You my boy!

Epilogue: Look, I admit Jackman, Hathway, Crowe and newcomer Samantha Barks gave their damn damndest. But they did so for nothing; they were tilting at windmills. Broadway musicals do not, will not and cannot ever work as films. Period. Cinema is a medium that emphatically relies on showing above telling, and musicals are all about telling; the characters tell us how they feel, where they’re going , what we just saw happen and what will happen next. It is the height of insanity to pretend that it’s a matter of “getting it right” with these adaptations. It can’t be gotten right: these mediums are in diametric opposition to one another.

Look, on stage, Les Misérables may bring me to tears as I’m neither against singing nor against melodrama (if confined solely to theatrical productions). But this nearly killed me. Towards the end, I had a full-blown literal panic attack out of a fear they would never stop singing. To the legion of die-hard musical enthusiasts: I tried. I promise, I really, really did.