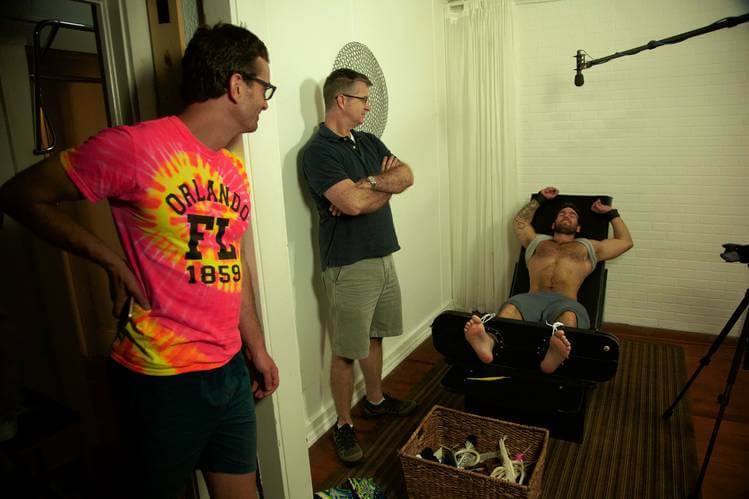 All of the good puns have already been used. Comments such as “Tickled will tickle your curiosity” and “By the end of Tickled, you won’t have anything to laugh about,” are the kinds of zingers film critics dream of. What puns about tickling are even left for me to find a clever way to tell you about my reaction to the documentary by David Farrier and Dylan Reeve? Avoiding overused puns in this review is going to be no laughing matter…

If claims in Tickled are true, then a vast tickling empire operates in the shadows like the real-life version of a global criminal organization that you’d expect to see fighting James Bond. There’s a campaign of lawsuits to discredit the documentary, but that seems like business as usual for an alleged sport called “endurance tickling.” David Farrier, an openly gay entertainment reporter from New Zealand, hoped to cover the bizarre activity for a by-the-numbers “water cooler” story. He contacted the media company that created endurance tickling but was shocked when they responded with homophobic rants and threats of intense legal actions.

Naturally, the reporter’s curiosity peaked, and he travelled to America to continue filming a documentary that plays like a quirky Vice.com article from hell. It’s easy to see why detractors of Tickled are calling the film “fake,” as the documentary’s only major issue is that it’s much too cinematic for its own good. Something about the documentary feels too glossy, as if it’s a dark-comedy first and a documentary second. Cinematic documentaries aren’t always bad, but this material stands on it’s own. If Tickled is legitimate, however, then the campaign to discredit the film is no different from other tactics used by the creators of endurance tickling to crush their enemies.

The villain of the piece is Jane O’Brien Media, the firm that hosts endurance tickling competitions around the United States. Farrier’s investigation into the unusually secretive company leads him down a rabbit hole of online bullying and fringe fetishism. There are moments in Tickled that are straight up scary. While it’s easy to underestimate the animosity of a sport whose name you can’t even say with a straight face, Jane O’Brien Media has brutal methods of protecting its most popular product. A testimonial from a former endurance tickler reveals the company is capable of declaring all-out-war on opponents after the slightest retaliation.

I’ve read three different reviews saying, “By the end of Tickled, you won’t have anything to laugh about,” and that’s probably because (1) it’s hard to go wrong with a pun like that and (2) it’s completely true. The final act of Tickled is profoundly unsettling, and the documentary ends on a chilling “mic drop” moment that sticks with you. If your stomach doesn’t churn, then you may want to see your doctor. It would almost be a relief if Tickled were fake, because it reveals a dark corner of humanity that I would prefer not to exist.