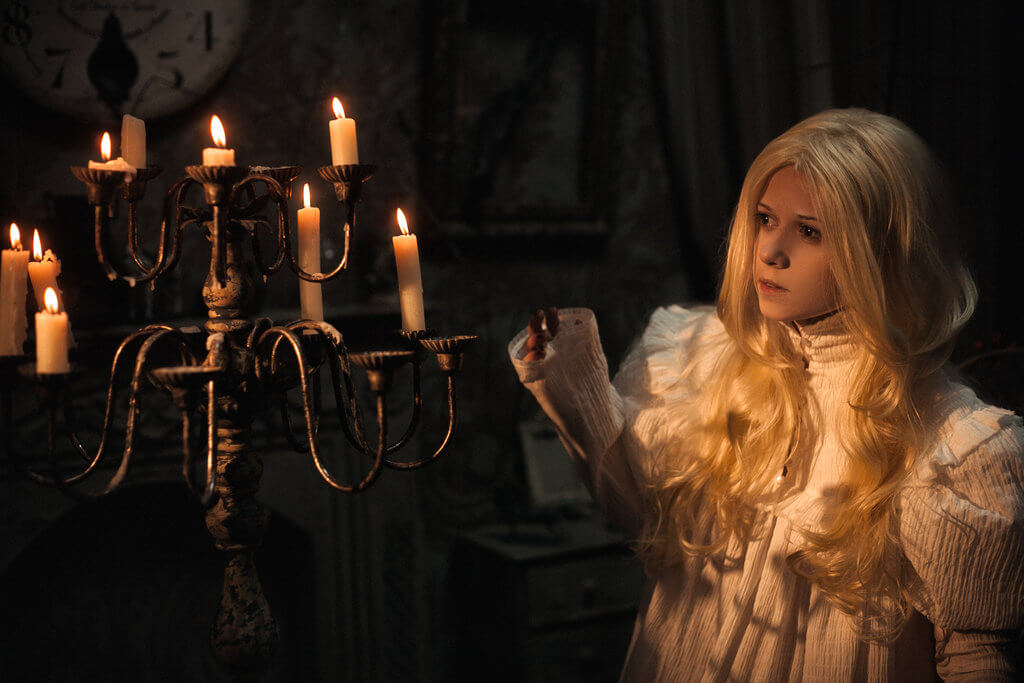 Crimson Peak is just fine. It’s an aggressively unremarkable film; decent enough to tide over Guillermo del Toro fans before the director inevitably spends the next few years in development hell trying to get his next project off the ground. It should also hold over Tom Hiddleston fans until the British actor returns as Loki in the next Thor movie. There’s quite a bit to like about Crimson Peak and maybe just a little bit more to dislike, but absolutely nothing to love or hate. For all of its genre-bending, Crimson Peak is never more, or much less, than serviceable as either gothic romance or ghostly horror.

del Toro’s new film opens on young Edith (Mia Wasikowska) being warned by the ghost of her mother to, “Beware of Crimson Peak.” It’s not too long before Edith is all grown up and finds herself married to a mysterious English aristocrat, named Thomas (Hiddleston), who occupies a crimson-colored mansion located at the top of a peak that is infested with ghosts. The ghosts of Crimson Peak, much like the titular mansion itself, are simply too gorgeous to ever really be scary. Although some genuine tension is built here and there, you never want to watch through your fingers and risk missing out on the incredible production design.

Shortly after arriving at the mansion, Edith begins to suspect that Thomas’s sister Lucille (Jessica Chastain) is up to no good, more ghosts send more warnings Edith’s way and everything you’ve come to expect from movies like this unfolds in a perfectly adequate manner. The problem with movies like these is that they’re entirely exercises in style; this means that you never connect with the human drama, even when it’s between great actors playing their parts well. In a film with different goals, the exchanges between Edith, Thomas and Lucille might have come to life. Here, they are limited by the fact that we aren’t really following characters but genre archetypes.

The most affecting element of Crimson Peak is it’s violence, which feels like it’s been pulled from a much more unsettling movie. One violent scene in particular depicts a character slowly pulling a knife out of their cheek, entirely in close-up. It drew some audible gasps from the audience. Much of the violence is used to remind us of del Toro’s favorite trope, which is that his human characters are often scarier than his monsters. The message is loud and clear here, even if it doesn’t resonate. I imagine the only thing I will eventually remember about Crimson Peak is how brutal it is.

Crimson Peak is a standalone film but it feels a lot like a spiritual sequel to del Toro’s last film, Pacific Rim. Both films are full of spectacular designs and are good enough, I suppose, but neither comes close to exploding off the screen like they should. Both films also feature Charlie Hunham, although fortunately, he is given much less to do this time around. Crimson Peak is tough to recommend or to suggest it be avoided. If it’s already caught your interest, feel free to give it a shot. Just don’t expect Crimson Peak to climb to any new heights.