Home » Film » Less Than Some 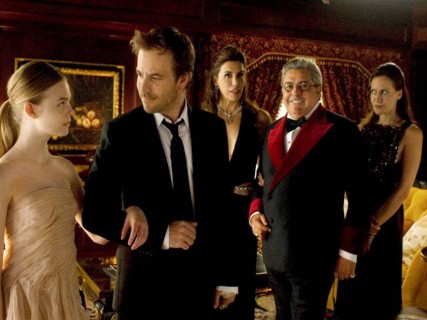 Devoid of music or dialogue, the opening frames of Somewhere capture a sports car driving repeatedly in a circle for, like, a really long time before the car stops and an obvious douchebag exits the vehicle and stands there … for, like, a really long time. Had writer/director Sofia Coppola rolled credits immediately thereafter, the experience of Somewhere wouldn’t have changed an iota. The remaining 90-some minutes are full of tediously depicted, marginally significant events in the life of a character so bland and unoriginal that they had to unearth Stephen Dorff to play him. There’s a fine line between soft-handed realism and self-absorbed naval gazing, and Somewhere is a finger plugged in a belly button.

Because the majority of the film is dialogue- and plot-free, at least it’s easy to sum up. Johnny Marco (Dorff) is a Hollywood star who spends his days watching strippers bump-and-grind in the bedroom of the hotel suite he calls home. He sometimes bangs random ladies and smokes so much that Joe the Camel is contemplating an intervention. He has an 11-year-old daughter named Cleo (Elle Fanning) and, as is mandated by the law of character archetypes, he neglects the crap out of her.

When Cleo’s momma bounces town, she ditches Cleo with Johnny. So the deadbeat dad is forced to tote his tween to press junkets and such. Don’t worry, Coppola never skips out on the most thrilling part of their time together: slow, silent drives from place to place, shot from a camera trailing the car so you can’t even see what’s happening inside.

Whereas Coppola’s Lost in Translation was a masterwork of understated, subdued emotional catharsis, Somewhere is mostly just boring. When Dorff gets weepy and laments, “I’m nothing,” he’s not wrong. His twiggy frame is perpetually draped in ratty T-shirts and his charisma meter may swing negative. Yes, real life is full of minor moments stacked loosely atop one another, and Coppola’s ability to deftly replicate that sensation is her gift. But watching someone who is too boring to even dislike as he eats, sleeps and runs errands set to indie rock music sure feels like wasting the precious allocation of life.

Somewhere will resonate for some folks who cotton greatly to quiet introspection, no matter how vapid the introspector. Coppola’s talent is unquestionable, but she won’t be using Somewhere as evidence to prove it.