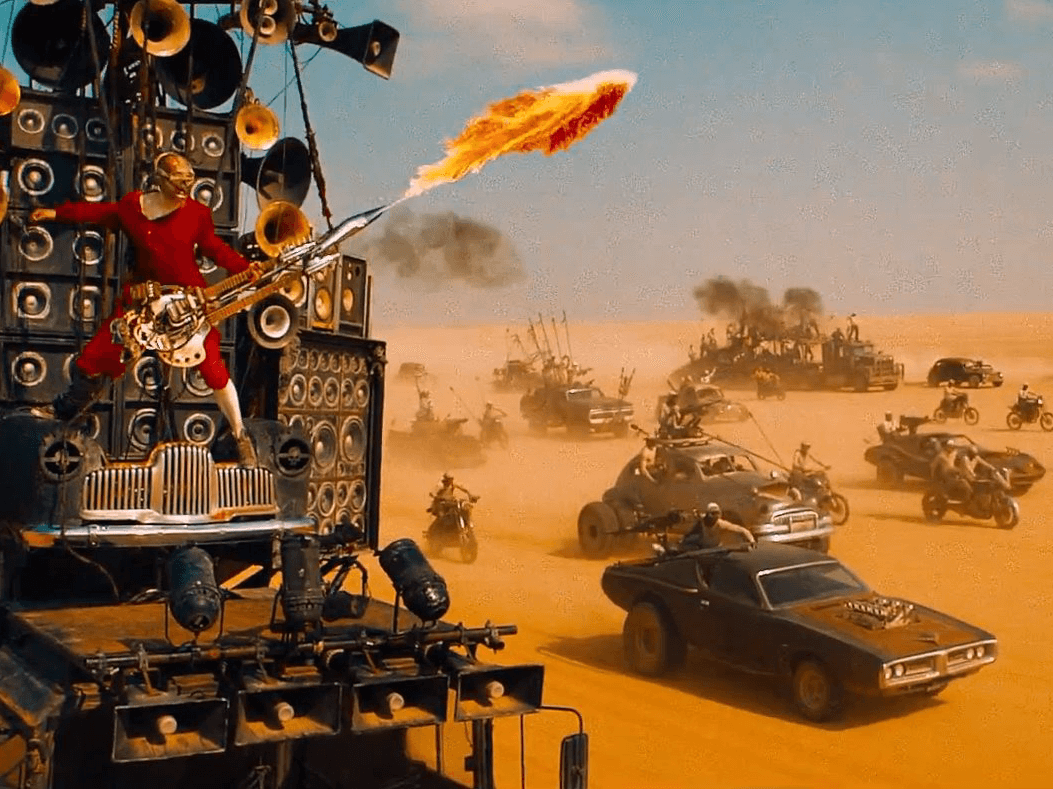 Typically, assembling my “best films” list is a torturous process of deciding which films get culled after I do some mental Hunger Games with movies as tributes. This year? I actually had to reach into the second level and promote two “also-rans” into the rankings. The top of the list isn’t just good, it’s all-time good for me, filled with at least 3 movies I will watch until I get “jelly eyes.” What there was to love in 2015 was damn near perfect, there just wasn’t a huge amount to get super excited about.

Honestly, that’s okay, quality over quantity is applicable to things other than sexual experiences. Now, before you can eat your yum yums, you have to scarf down your undercooked brussel sprouts. So here are the worst 5 movies I saw last year.

5.) San Andreas – One of the most subtly morally repugnant films of 2015, this is a movie where a man shirks his sworn oath to protect citizens in order to selfishly only save his own family. Also, I’m calling it: No more “boat racing up a huge wave” scenes. We’ve used them all up.

4.) Spectre – Easily the worst Bond film in recent memory, the tone was spectacularly miscalculated. You can’t weave together “grim ‘N gritty” with “cat-stroking villainy” without the result being a confusing mess. Honestly, until just now, I forgot this even came out in 2015, and it was released in November.

3.) The Good Dinosaur – I would have actually put Inside Out on this list at number 5 if I didn’t think I’d have to take out a good life insurance policy against Bing Bong enthusiasts. Fewer people love (or even remember) this Pixar debacle. Uncharacteristically stale animation combined with a generic story and insipid message, the only people this may appeal to are creationists who believe man and dinosaur lived at the same time.

2.) It Follows – Boy, is It Follows lucky the number one film on this list came out. For the life of me, I will never understand how one single person enjoyed any of this boring, poorly acted, slut shamy, lame endeavor. Am I getting Punk’d? Is everyone Punking me? If so, it’s not funny anymore. Bring out Ashton.

1.) The Hateful Eight – I’m confident placing this at the top of my worst films will not be met by any reaction from die-hard Quentin Tarantino fans at all. Oh, right, you can’t tell but I wrote that using my sarcasm keyboard. This ode to cynicism, misogyny and racism has been violently defended by those who don’t want to feel guilty about enjoying films that are cynical, misogynist and racist. Setting all that aside, it’s a boring and unpleasant three-hour waste of time. So it sucks even if it doesn’t suck for the reasons I think it sucks.

10.) Spotlight – Nobody tell Spotlight it almost didn’t make into the top 10, okay? I don’t want it to feel unloved. The truth is, this one grew on me. It’s the story of how reporters at the Boston Globe exposed the systemic child abuse in the Catholic Church. What left me cold at first, the lack of any real depth or humanization to the reporters as characters, has served over time to be an asset; what stayed with me is the praise of journalistic pursuits, the power of information and the responsibility of good people to use facts to shine light in the darkest of places.

9.) Steve Jobs – Aaron Sorkin’s script is the single walkiest-talkiest thing he’s ever done, so of course I loved the crap out of it. Less an actual biography and more a Shakespearean investigation of the brutality of creative genius, Michael Fassbender absolutely stuns in a role that would get him an Academy Award in any year Leonardo Dicaprio didn’t crawl naked inside a horse. The film actually has one of my favorite tiny beats of all time in it, as the mournful frustration of Fassbender’s delivery on “I am poorly made” gives Sorkin’s words limitless power.

8.) The Wolfpack – An insane documentary about a group of siblings kept in isolation and captivity by their father, this was a reminder of the vibrancy and potential of cinema. These kids had only the outlet of movies with which to survive. They didn’t just consume the VHS tapes and DVDs they were allowed to watch, they reenacted them, using those stories as a coping mechanism to deal with a cruel, dispassionate upbringing. If the triumph of these wills doesn’t move you, you’re unmovable. Jerk.

7.) The Look of Silence – This should be higher. Like, I know I’m going to look back on this list next year and curse myself, but here I am, doing it anyway. This companion piece to The Act of Killing establishes the documentary duo as the most compelling one-two cinematic punch to ever address such a significant event. The criticism leveled against the first film was its failure to include the families of victims and its failure to hold the perpetrators of genocide accountable. That is literally all this film is: a face-to-face condemnation of brutal monsters by the family of victims. This should totally be higher on this list. Dammit…

6.) Ex Machina – I don’t think any movie last year surprised me quite as much as this one did. A slick, well-crafted sci-fi meditation on creation and sexuality, this only works because the three leads (Oscar Isaac, Domhnall Gleeson and Alicia Vikander) turn in masterful, nuanced performances. The climax and resolution are so breathtaking, unflinching and important, some found themselves turned off. Me? That’s what elevated it to being among the year’s best. If you can’t smash the patriarchy, let it die in horrifying other ways.

5.) Dope – This movie is why I love movies. Full of life, filled with diverse, brilliant actors inhabiting diverse, brilliant characters, Dope was thrilling, riotously funny and possessed of a killer message. The fourth-wall breaking climactic speech about racial expectations may have been on-the-nose and didactic, but that didn’t stop me from literally clapping when it was done. In a perfect world, we get a dozen movies with this same spirit, energy and dedication to originality every year.

4.) What We Do in the Shadows – The funniest movie of the year somehow brought life back into one of the stalest tropes: the mockumentary. Actually, it was a vampire mockumentary, which means it should have been physically impossible for this to have made me laugh one time. And yet, I howled…frequently. Comedies are judged by their rewatchability in terms of lasting legacy, and this gets funnier with every viewing. It’s also worth noting that small moments of sincerity in heart are welcome in even the most insane and ridiculous setting. The hardest you’ll ever laugh at a severed jugular.

3.) Creed – Let’s get something straight: When you talk about #OscarsSoWhite or mention the Academy’s lack of diversity, you must point people to Creed. It’s morally and intellectually repugnant that people assert there wasn’t good work done in film this year by people of color. Do we need more? You bet. But Creed was a goddamn powerhouse. A masterfully directed, perfectly scored, amazingly shot, beautifully acted, crowd-pleasing, fist-pumping character study and meditation on legacy and self-worth, director Ryan Coogler should be digging his way out of a pile of awards right now, as should Michael B. Jordan. The next time some fool says there were no diverse nominations because none were deserving, throw a Creed-style roundhouse at them.

2.) Star Wars: The Force Awakens – Star Wars is back, y’all! Like, really for real back! A spiritual remake of A New Hope, this gorgeous entry brought back the fun, the awe and the joy that made the world fall in love all those years ago. With another iconic villain, a pitch-perfect heroine and a bad-ass couple of dudes, the characters popped off the screen with rare power. My memories of 2015 will likely always include two prolonged social media fights: One against Hateful 8 lovers, the other against Force Awakens bashers. I’m good with that.

1.) Mad Max: Fury Road – There’s a very real chance this is my new favorite movie of all time. Not since I was a kid did I see a movie this many times in theaters. It’s still on top of my Blu-Ray player months after its release. I didn’t know it was possible to do this, to make a movie with so much action, energy, passion and enthusiasm welded onto a cautionary tale of the patriarchal Armageddon hurdling our way. Furiosa (Charlize Theron) isn’t one of the best female characters of all time. She’s one of (if not) the best characters (full stop) of all time. I love every tiny bit of this movie, from the pasty warboys to the quotations it added to my vocabulary (“Mediocre!”). Fury Road is a miracle to me. When it comes time to pen a “best of the decade,” it’ll be there. And chances are very real that, whenever my run at reviewing comes to an end, it’ll make that final life-long list too.