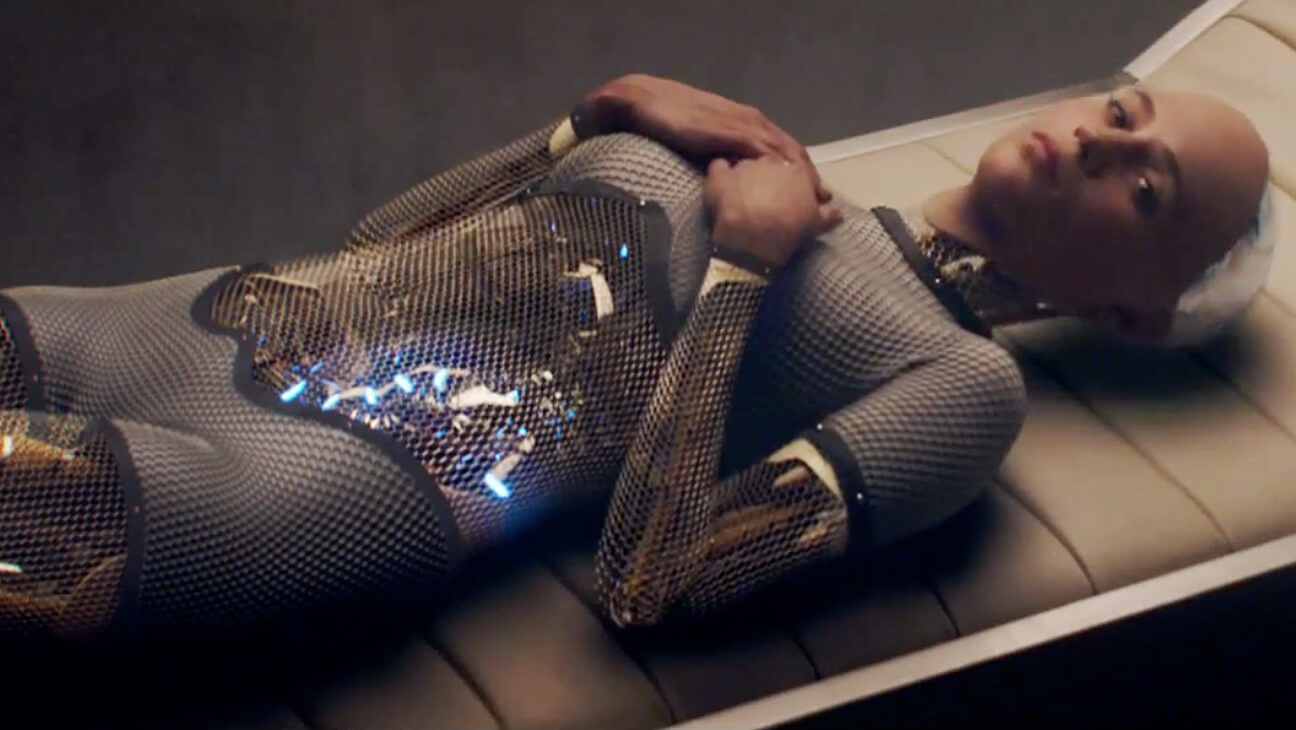 Midway through Ex Machina, writer/director Alex Garland’s taut thinker, super genius inventor Nathan (Oscar Isaac) tells human guinea pig Caleb (Domhnall Gleeson) that the invention of artificial intelligence was always a matter of when, not if. Here’s a thought: Could we, you know, not invent that? Let’s go ahead and risk missing out on the adorbs squeakin’ n’ beepin’ from R2D2 in order to avoid the first step in the downfall of all humanity. As a general rule, if you’re making a pro/con list and “downfall of all humanity” is on it, you don’t need a pro/con list.

What’s amazing about Ex Machina is Garland’s precise control over the audience both visually and through a singularly perfect script. The characters and the audience are both captive, processing the slightest information as fast as they can. We know nothing about Caleb, other than that he works for the fictional equivalent of Google and has just won an internal company lottery to spend a week with the reclusive head of the company, Nathan. Isaac doesn’t predictably ape Steve Jobs or other odd inventors with his performance, opting for a sublime “bro-tastic” delivery, complete with near-constant beer swilling and plenty of casual misogyny.

This is in stark contrast to the muted Caleb, a painfully shy nice dude who is overwhelmed by the opportunity in front of him. That opportunity? To be the human component in the “Turing Test,” which determines whether a computer has achieved true artificial intelligence. That computer is Ava (Alicia Vikander), who has the face of an angel and a body full of exposed circuitry. Nathan in full frat-mode tells Caleb not to get too hung up on that body though, bluntly telling him that not only is it possible for her to have sex, it’s possible for her to like it. As though a bro would make a robot he couldn’t nail.

What follows is a sophisticated verbal and mental dance. Caleb tests Ava who tests Caleb who tests Nathan who tests Caleb. The action is confined to a single location, really just two or three rooms in the mansion. The result feels like a brilliant stage play, with actors testing the emotional and mental limits of themselves and others through nuanced, subtle games. Garland is so methodical, so painstakingly patient, that he doesn’t pull back the curtain until the precise moment beyond which it would have become irritating.

Of all genres, science fiction may be the most fluid. It is graceful enough for a feature-length exploration on the boundaries of man and God, rich enough for garish speculative horrors and visceral enough for a slam-bang thriller conclusion. A longtime accomplished screenwriter, this is Garland’s directorial debut. More please. Lots more. Like as many more as you can. For all the kvetching about how maligned the film world is by sequelitis and remake overkill, it’s equally as important to praise those rare works of original fiction. Ex Machina is breathtaking, brilliant filmmaking that deserves to be rewarded.