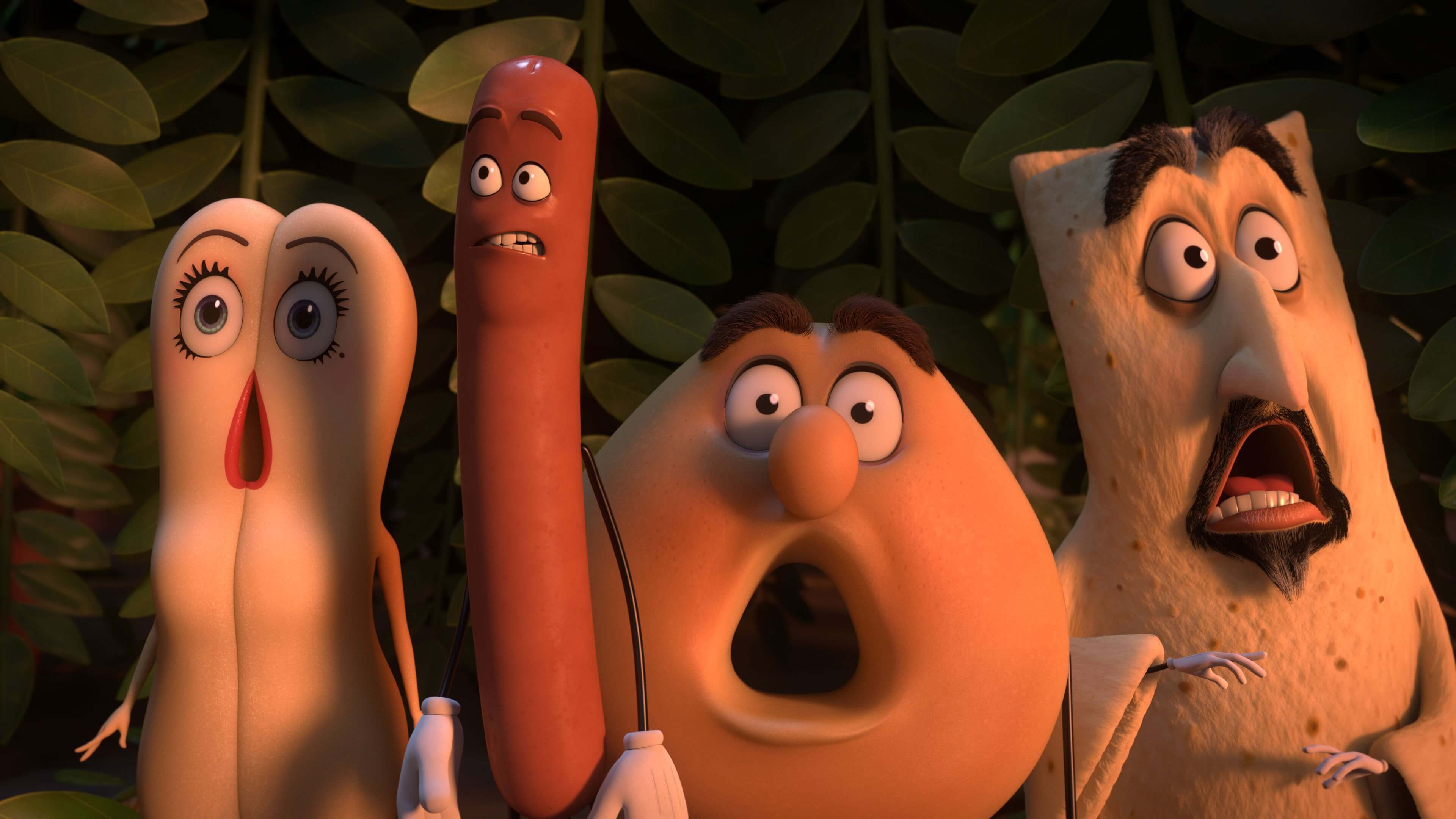 The first 70-or-so minutes of Sausage Party is obscenely insightful, a hilariously raunchy contemplation of how spiritual beliefs can be ignorance-inducing and socially blinding. The last 15-20 minutes is as gloriously demented, completely unhinged and shocking as anything can be in the age of the Internet. Congrats to writers Kyle Hunter, Ariel Shaffir, Seth Rogen and Evan Goldberg on scoring whatever potent sticky-icky-icky gave them the idea for this wholly original, hallucinatory madness that is easily the funniest film of the year.

The premise is simple: All products at the grocery store are secretly alive, down to the feminine hygiene products. The sentient commodities believe that the humans who purchase them are gods that carry them into a blissful afterlife. But when a jar of Honey Mustard (Danny McBride) is returned, he tells Frank (Rogen), a hot dog, and Frank’s hot-dog-bun girlfriend, Brenda (Kristen Wiig), the truth about what people actually do to them…

Frank and Brenda are joined by Sammy (Edward Norton), an overtly Jewish bagel, and Lavash (David Krumholtz), who is Arab, on a journey that leads to startling revelations. This is a cartoon with a penis joke in the title, so the humor and metaphors at work here aren’t particularly subtle. But that doesn’t mean they aren’t also sophisticated and important, striking at the divide between those who oppress others as a byproduct of their faith and those who rudely and myopically treat those believers as morons.

Again, this is all until the last sequence, which is just so very vile in all the best ways.

Sausage Party is real, actual satire, a species long thought extinct due to rising temperatures from too many “hot takes.” It is a chimera of Mel Brooks and Lenny Bruce, co-directed by a guy best known for Thomas the Tank movies. Because it’s animated, the characters can do things that would be slapped with an NC-17 for merely being described in a live-action movie. Gross, suggestive comedy need not be ignorant, and Sausage Party is anything but, with its subversive subplot featuring Sammy and Lavash standing as a prime example. Yes, there are “guac and balls” jokes, but there’s also a surprisingly emotional lament from a taco (Salma Hayek) struggling with same-sex urges.

Oh, and there’s a great villain: Nick Kroll now officially has the best line on any IMDB page, as the one for this movie lists him simply as “Douche (Voice).” The real enemy in the film, however, is entrenched prejudice by both those of faith and those without. With potshots at segregation, white privilege, sexism and homophobia, the creators understand that it’s okay to be vile and gross so long as the targets are deserving.

Sausage Party may well wind up being one of the best films of the year, which is something that sounded impossible when the project first emerged. If it stands, this will mark the first film where injecting bath salts is a key plot point and in which taco-on-hot-dog-bun action bubbles with sexy innuendo to ever break into critics’ top 10 lists.