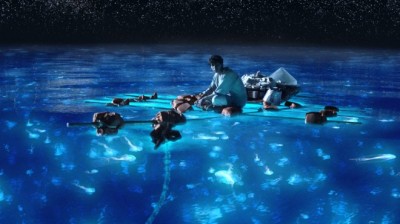 Forget Babe Ruth pointing a stick at bleachers; Life of Pi raises the stakes on “shot-calling” to unprecedented levels. Early on, it is explicitly stated that if the older version of Pi (Irrfan Khan) in the present day does not tell a story that convinces “The Writer” (Rafe Spall)—and by extension, the audience—in the existence of God, it’s a failure. No pressure or anything.

Things actually looked promising at the outset, as we hear the tale of how a young Pi shortened his given nomenclature to a mathematical symbol because he was named after a swimming pool. Pi hobbles together pieces of different faiths, composing a unique religion that results in perhaps the most unique prayer ever: “Thank you, Vishnu, for introducing me to Christ.” His is an amalgam belief system, and his literal journey towards spirituality is actually far more compelling than what comes next.

Pi’s family has a zoo. Just go with it. And while transporting animals on a cargo ship, the boat capsizes and sinks, leaving a teenage Pi (Suraj Sharma) alive on a life raft with a hyena, a zebra, an orangutan and a Bengal tiger named Richard Parker.  As nature increasingly takes its course, Pi is eventually just left with Richard Parker, a fuzzy and savage killer with a proper name. Well, technically this is the fantasy version of a story filled with flashbacks and dream sequences and not the more realistic version featuring his mother (Tabu) and a chef (Gérard Depardieu). The act of deciding which tale is more “true” is intended to be the faith part, but while the book had the literary license to craft a greater degree of vagueness, the film can’t really manage.

The delirious praise that’s being heaped upon Life of Pi’s visuals is surprising, in so far that it seems impossible that people still get shocked by what computers can do. They can do, like, anything. Yes, the Avatar-esque glowing plankton is pretty, but it doesn’t make up for the pre-chewed themes we’re asked to digest while looking at it. What’s more, by dodging the darker elements suggested by the story, the full dynamic of any honest conversation about God is dodged too.

Look, there’s nothing wrong about Lee’s film. It is pretty, well-acted and brave for largely using unknowns to tell an unconventional tale that many believed was unfilmable. There’s just nothing all that right with it either, with its milquetoast moralizing and allegedly awe-inspiring visuals that are more “aw, well…” inspiring. To be sure, Life of Pi will dot many a top 10 list and is sure to be represented come Oscar night, but because it won’t trim the roster of atheists, it technically loses at its own game.