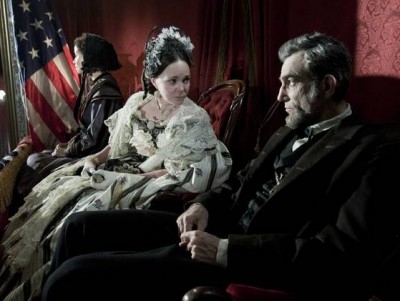 A humble suggestion: Force the chittering, self-serving partisans in Washington who increasingly prefer filibusters over floor votes to watch Lincoln. Director Steven Spielberg’s latest provides a character sketch, not of its titular president, but of America’s political process. While hundreds of thousands of sons and fathers killed each other mere miles from where the House of Representatives screamed at one another, men of integrity fought to forever change this nation; today, politicians debate modest tax increases with the intensity of emancipation. Fools.

Spielberg hitched a ride on Bill and Ted’s phone box and traveled back in time to pick up the actual Abraham Lincoln, or at least that’s how Daniel Day-Lewis makes it seem. His portrayal is breathtakingly nuanced and painstakingly researched. Liberated by a lack of video or audio evidence, Lewis was free to compose his artistic fiction about a real man; he presents someone unassuming but passionate, humble but aware of his place in history, a man of integrity but no saint. Spielberg and writer Tony Kushner don’t give honest Abe the sloppy wet kiss some expected, mostly because they’d rather make out with democracy itself.

Given the potential for this quasi-biography to turn into cinematic racial messiah-making, it’s a good thing that Lincoln opens on two passionate black Union soldiers making the president’s shortcomings known. Sure, it would have been better if they were quality characters who showed up more than the once, but it is an early sign that emancipation and not a man’s patience is the film’s focus. From the battlefield, to which we do not return until the film’s end, it is a hard right into political backrooms, as Lincoln argues against waiting until the South’s impending surrender to pass the constitutional amendment abolishing slavery.

His closest political advisor, William Seward (David Strathairn) initially thinks it a stupid idea, but is persuaded to hire Robert Latham (John Hawkes), W.N. Bilbo (James Spader) and Richard Schell (Tim Blake Nelson) to acquire the votes they need by offering presidential appointments to lame-duck congressmen of the opposing party who will soon be out of work. But with rumors of a peace offer from the confederacy, Fernando Wood (Lee Pace) and his cronies dig their heels in and make one last stand.

Lincoln’s personal life only really surfaces when he is forced to deal with his manic depressive wife, Mary (Sally Field), and his son, Robert (Joseph Gordon-Levitt) who wants to join the military. This isn’t to say we don’t see his character revealed, but it isn’t an insufferable, misty-eyed recap of his life. In fact, if anyone makes eyes mist, it’s probably Jones, who’s gruff and unwavering belief in equality has very personal roots guaranteed to get a sniffle.

Because it’s a Spielberg film, he tries very hard to ruin the ending, driving the point home with a ferocity that suggests he thinks we’re all idiots. In fact, the closest the film comes to sheer idolatry is in the last three minutes, when a somber walk that would have been a perfect final shot moves to a doe-eyed freedman looking at Lincoln like he just saw God.

The take-home from Lincoln is that as wicked as government can be, it has the capacity for greatness. Squint, and this film about a critical-thinking, unflappable president lambasted by his own party for not progressing fast enough and accused of destroying the fabric of America by an opposing party determined to create gridlock feels a little familiar. But Lincoln isn’t a preachy message about today; it’s perhaps the first political history epic, crammed with brilliant performances and one botched landing short of perfection.