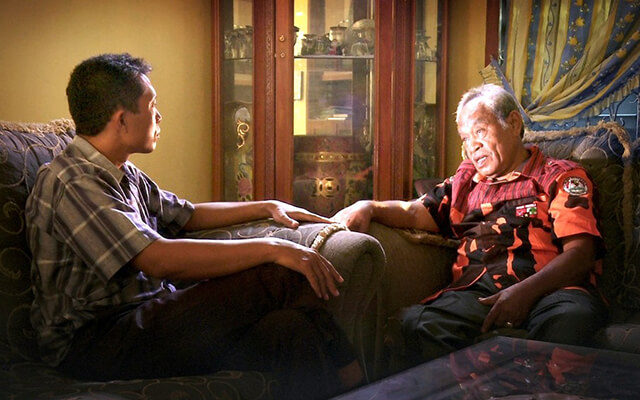 As soon as I finished The Act of Killing, director Joshua Oppenheimer’s stunning documentary about an Indonesian genocide, I had but one thought: Sequel! I mean, the franchise possibilities for a soul-crushing look into the horrors of which humanity is capable is just through the roof, am I right?! Admittedly, news that Oppenheimer would be releasing a follow-up covering the same content, The Look of Silence, was initially met with confusion and suspicion. Spending another few hours sifting through the moral carnage of debased atrocities seemed unnecessary. I assure you, it is of the utmost importance.

Silence is a powerful, stirring meditation in its own right. But when placed in conjunction with Killing, the pair serve as inarguably one of the most powerful displays of what the medium of documentary filmmaking is capable of achieving. Although Killing captured the moment when Anwar Congo, a leader of a massacre of alleged Communists in 1965-1966, finally realized how purely evil he was, the victims remained silent. Because the government still in power is populated by the perpetrators of said crimes, Oppenheimer’s first film felt negligent of those directly affected.

Enter Adi Rukun (not his real name, but the one he uses in the film). An optometrist in his mid-40s, Adi uses vision checks as an excuse to talk with the people who slaughtered his brother. Let me say that again: a man sits down with people powerful enough to have him killed, tells them he knows they murdered his brother and urges them to repent for it. Holy shit, right? Adi is so desperate to forgive that it is exhausting to watch him be denied the most basic concessions. The villains have so thoroughly brainwashed themselves or expunged their crimes from their memory that they can’t muster even a half-hearted apology to a man whose brother they mercilessly sliced open with machetes and dumped into a river.

Again and again, Adi tries to procure even the feeblest of apologies to no avail. But there is no failure here. Oppenheimer’s documentary is a matter of public record. This is gotcha journalism at its most noble, ensuring that those responsible are recorded and that the innocents who suffered are remembered. The symmetry of Adi’s chosen profession and his insistence that these monsters “see” what they’ve done is impossibly perfect. Oh, and these folks are monsters, y’all. Multiple times, they admit to drinking the blood of their victims. This was some biblically evil stuff.

You don’t enjoy a movie like Silence; you endure and learn from it. Justice in the setting of such large-scale crimes is almost nonexistent. In the absence of international war crime tribunals and the liberation of a still abused populace, Oppenheimer’s documentaries are as good a substitute as can be found. A documentary duo unlike any other, The Act of Killing and The Look of Silence are filmmaking as activism and cinema as history. What Adi lost can never be replaced, but his story and the memory of all those who suffered has found a voice to tell it that will never be forgotten.