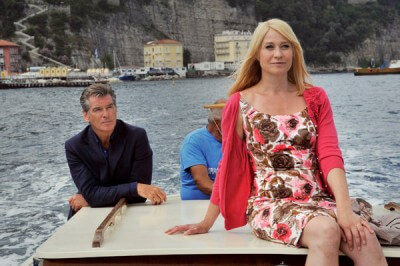 Let’s be honest, Love Is All You Need (or Den Skaldede Frisør if Danish is more than a donut to you) is basically redundant escapist fantasy.  But when the fantasy services the desires of middle-aged women struggling with uncompassionate husbands and cancer and not hormonal, heterosexual male teenagers (as most movies seem intent to service), it scores a free pass on originality.

Writer/director Susanne Bier’s latest is destined to be remade into a domestic Diane Keaton vehicle. But until then, feel free to enjoy the splendid performance of Trine Dyrholm as Ida, a woman who finishes her chemo treatments just in time to see her louse husband, Leif (Kim Bodnia), stickin’ it to his accountant, Thilde (Christiane Schaumburg-Müller). Thilde is every cancer-stricken, hairless, mastectomy-surviving, faithful wife’s worst nightmare: a healthy and beautiful version of her younger self. She’s the devil in booty shorts.

Because all crises occur immediately surrounding a family gathering, Leif and Ida’s daughter, Astrid (Molly Blixt Egelind), is getting married in Italy that weekend. Or at least she’s supposed to marry Patrick (Sebastian Jessen), who has an “Elton John”-sized secret hidden just about as well as the crocodile rocker’s was… Thankfully, Patrick’s dad, Phillip (Pierce Brosnan), is the widower of which dreams are made. He’s a wealthy silver fox and devoted father who only cares about what’s inside a woman’s heart. He’s every bit as plausible as any role Megan Fox has ever played and should be afforded no more scrutiny.

Anders Thomas Jensen’s script can be forgiven for serving Brosnan on a platter to Dyrholm, especially because the actress exudes holistic, raw beauty. What it struggles with is both tone and subplot. It’s melodramatic moments fail to mesh with its rom-com moments, leaving audience members unsure how to handle characters like Leif, who is at once soul-less vermin and comic relief. And the “B” plot, involving Astrid and Patrick, tastes like pure asphalt given the surface-level attention it is given. Watching a vibrant young woman’s heart break at having fallen for a closeted homosexual is nearly as depressing as watching a closeted homosexual deny himself for the sake of his loving father’s supposed happiness. And this is primarily a comedy?

But the core, Ida’s story, is blissful daydreaming. Her intelligent, kind and curvaceous 50-something wife/mother is seen for the modern-day marvel she is by a man who possesses the external qualities (flowing hair) and internal qualities (superior listening abilities) that comprise stereotypical fantasizing for women in that demographic. It helps that Dyrholm’s performance transcends language, with heart-racing flirtation and gut-wrenching fears of mortality.

Love Is All You Need is an endearing reminder that escapism is not relegated to boys who dream of car chases and big-chested ladies. It is a sweet, somewhat flawed, exploration of what women “of a certain age” want. And considering how rare it is for such silver-haired visions to ever reach the silver screen, it is a recommendation easily made.