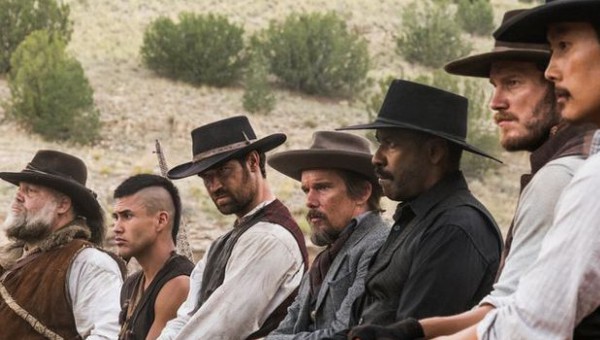 Among the last words of 1960’s The Magnificent Seven is this Nietzschian fortune cookie quote: “We lost. We’ll always lose.” At the end of 2016’s The Magnificent Seven, a cloying voiceover delivered atop jangly, optimistic music (overlaying a literal “riding off into the sunset”) plainly states that all involved were heroes, whose actions were truly “magnificent.” Like a game of telephone played with tin cans used for six-shooter target practice, somewhere along the evolution—or devolution, depending on your feelings—of Akira Kurosawa’s Seven Samurai to John Sturges’s The Magnificent Seven to Antoine Fuqua’s The Magnificent Seven, the core was lost. Almost all that’s left are horses, guns and casual racism.

The new Mag 7 also retained the simplistic plot: A bounty hunter, Chisolm (Denzel Washington), is convinced by a wide-eyed widow, Emma Cullen (Haley Bennett), to help defend her town against a guy you know is evil because he’s named Bartholomew (Peter Sarsgaard). Seriously, has anyone ever said “Thank God, we’re saved! Bartholomew is here!” Anyway, Chisolm awkwardly and really bizarrely rounds up six other salty fellas to help him kill just a tremendous amount of people and save the town of Podunk McNowhere.

Mag 7 is one of those movies where every character can be described with very few words. We have Josh Faraday (Chris Pratt), the charming rogue; Goodnight Robicheaux (Ethan Hawke), the befallen war hero; Jack Horne (Vicent D’Onofrio), the mountain man and three men reduced to their ethnicity: Billy Rocks (Byung-hun Lee), the nebulously Asian; Vasquez (Manuel Garcia-Rulfo), dubbed “the Mexican” and Red Harvest (Martin Sensmeier), the “good” Native American (in contrast to the Western’s obligatory “bad” Native American).

It’s distressing that it has taken this long to address what is one of the all-time insane acting choices. D’Onofrio’s grizzled frontiersman is given a voice that sounds like an out-of-breath Southern belle or deviantly sexual prank phone caller. If there’s a just God, we will never find out if this was intentionally hilarious or a sincere choice by D’Onofrio, who increasingly resembles a sentient bearskin rug. As for the others, Washington is Washington, Pratt is Pratt, Hawke has too many sweaty close ups and the remainder do what they can with characters whose bios would fit on a Post-It note with room left over for doodling.

Really, the true villain of the piece is its overly methodical pace. The best Westerns do coyly stall, building anticipation for the climax as fingers wiggle millimeters above holstered Colt .45s. Mag 7 wiggles its fingers for way, way too long. The final showdown is pretty great and substantial in length, but by the time it arrives, we’re more than ready for everyone to have holes in them. By jettisoning the nihilism that permeated its predecessors, Mag 7 basically reduced itself to a rote modern Western. That’s fine for the most part, so long as no one pairs this by-the-books crowd pleaser with either of its ancestors.