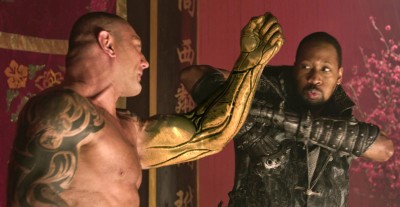 To walk in to The Man with the Iron Fists by choice is to give up your right to bitch about story and character. This is a movie written and directed by The RZA, a member of the powerhouse rap group The Wu-Tang Clan; produced by Eli Roth, the guy who made Hostel, and overseen by Quentin Tarantino, whose grindhouse kung fu depravity knows no bounds. To claim you expected good acting and a consequential plot is to be either a dirty liar or wholly uniformed.

Set in “Jungle City,” a place where grown men call themselves things like “Silver Lion,” the film follows a shipment of gold closer than Ron Paul. To be sure, the gold is a red herring…or gold herring, whatever. But so long as people have an excuse for kung-fu fightin’, all is forgiven. Silver Lion (Byron Mann) kills Gold Lion (Kuan Tai Chen) in order to steal said gold, which understandably angers Gold Lion’s son, sadly named Zen Yi (Rick Yune) and not Platinum Lion.

Meanwhile, the Blacksmith (RZA) is trying to earn enough to free his hooker gal (Jamie Chung) from Madam Blossom (Lucy Liu). When Jack Knife (Russell Crowe) shows up, things get super intense, which is pretty much what happens every time someone named after a weapon shows up. The ensuing conflict involves the loss of limbs, a man who can change his whole body to solid metal for no definable reason and lots and lots of hip-hop beats laid over physics-defying action.

As insane as it sounds given the recap, The Man with the Iron Fists doesn’t go far enough. It fails to commit to either a campy or serious tone and flounders in an effort to complicate a story literally nobody came to see. While The RZA clearly gets the genre, he was bitten by the “first-time director” bug, rendering him unable to leave the damn camera in one spot on a tripod and causing him to service wholly uninteresting subplots.

But this isn’t an entire miss. It has been too long since anybody stateside has seen a new unabashedly extreme kung fu movie with the right amounts of gore, humor and sexuality. And the way in which the hip-hop beats compliment scenes, even when nobody is making with the punching and the kicking, is a testimony to what is The RZA’s greatest cinematic gift: an ability to deploy music with calculated precision.

The unrealistic, schlocky kung fu genre has been hurtin’ for the last decade. And while The RZA will not be the one to resurrect it, this doesn’t mean it isn’t a genre worth saving. It’s just that with Chung giving an almost impossibly bad effort, the cinematography feeling more messy than kinetic and a lack of commitment to tone, The Man with the Iron Fists is only good in sporadic spurts. Basically, it’s all fits and starts, not fists and heart, and the latter is what this type of movie needs to remind people that it is not only viable but sorely missed.