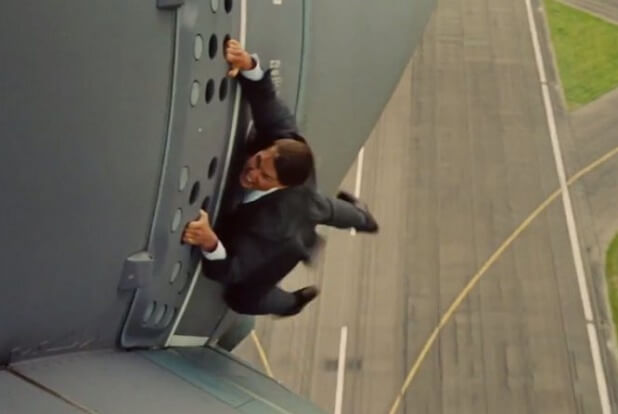 At some point, Mission Impossible and the 007 series “freaky Fridayed.” Bond moved from implausible ridiculousness to slightly-more-grounded cloak-and-daggerism, whereas Ethan Hunt (Tom Cruise) is now climbing into airplanes by holding on to a door handle while it takes off. There’s room for both types of espionage spectacles, and Mission Impossible has found its place by embracing the fact that, whether or not he’s Going Clear, Cruise is one of, if not the, greatest movie stars of all time.

After a theme-song-blasting, completely ludicrous (in the best possible way) mini-mission to open Rogue Nation, the film cuts to what everyone wants more of in their action movies: congressional hearings! CIA bigwig Alan Hunley (Alec Baldwin) squares off against Impossible Mission Force (IMF) leader William Brandt (Jeremy Renner), with the former demanding the IMF be dissolved. Hunley has a shockingly valid point, as he lays out the wanton collateral damage Hunt and company have left in their wake. Brandt’s feeble, bland defense leads to his spy squad being quashed with a demand all agents abroad return home.

But Ethan Hunt ain’t trynna hear that. He’s hot on the tail of “the Syndicate,” which Hunt’s sidekick Benji (Simon Pegg) astutely dubs the “Anti-IMF.” Composed of former super spies from various nations who were presumed dead (but actually just switched alliances to the Syndicate), the organization creates disasters and civil unrest with the intention of eradicating the modern status quo. They are led by Solomon Lane (Sean Harris), a weasel-faced dingus who is always one step ahead of Hunt. Along with bad-ass mystery woman Isla Faust (Rebecca Ferguson), whose alliances are hazy as hell, Hunt and his disavowed spy buddies must save the world. Again. Actually, again, again, again, but who’s counting?

Renner was added to the series previously as a safeguard in case the studio wanted to ditch Cruise, who was seen as a potential liability. That they didn’t switch leads is a blessing for two reasons: first, because literally the only reason these films work is Cruise’s action-swagger and stunt ballet; second, because Renner’s increasingly irritating acting prowess consists of making a face that says “We gonna do dis ting or what?” What’s great about Rogue Nation in particular is how it embraces the “legend of Ethan Hunt.” By now, dude has saved our global bacon in so many spectacular ways, another agent tells him that there’s no way all the things she’s heard about him could be true. Hunt’s response to that statement? A coy smile only Cruise could flash.

To wax philosophical, Rogue Nation is a reminder that there’s a difference between “a mindless action movie” and an action movie. The dialogue, acting and larger plot are passable but not ignorant, and the set-piece action sequences are sublime. From breathless chases on motorbikes to silent fights at an opera house, Rogue Nation dabbles in magnificent spectacle after magnificent spectacle, transferring Cruise’s smile from his face to yours. As fun and vibrant as a fifth installment of a series has ever been, we should be so lucky as to have Mr. Hunt accept more missions.