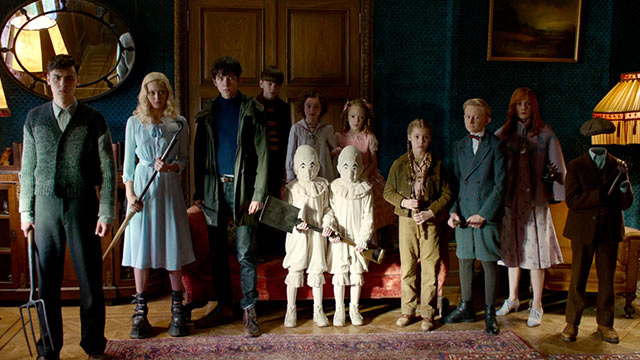 MPHPC begins as so many movies do these days, with a potentially senile grandfather (Terence Stamp) getting his eyeballs removed by a giant Slenderman-looking fella, who appears to have gargled some Cthulu. Upon finding his de-eyeballed grandpappy, Jake (Asa Butterfield) understandably goes a bit wibbly. At the advice of his psychiatrist (Allison Janney), Jake and his dad (Chris O’Dowd) go to Wales to visit the orphanage Jake’s grandad grew up in. Once there, Jake discovers a secret world inhabited by “peculiars,” who are basically pale emo superheroes that pout a lot.

Jake immediately falls for Emma (Ella Purnell), who “controls air” or some such nonsense. Miss Peregrine (Eva Green), who runs the house, can turn into a bird and create “time loops.” The rest of the kids have powers ranging from useful stuff, like invisibility, to weirdly boring traits, like the kid who barfs bees. They are being pursued by the evil Barron, an eyeball-connoisseur who just-so-happens to be played by the only person of color in the entire movie, Samuel L. Jackson. Burton’s idea of diversity on screen has long been to include pale people next to slightly-less-pale people, but having a slew of white children terrorized by an evil black man represents a new low for a man whose career includes Dark Shadows.

This next part feels mean to say about a young actor, so let’s be positive first. Butterfield seems like a very nice boy who was likely super punctual and well-rehearsed on set. He also has inverse charisma and the vocal delivery of a Speak & Spell on low batteries. Green seems to be doing her best Helena Bonham Carter impression, and Jackson is in full gives-no-shit mode. Worst of all, the gothic whimsy that clearly inhabited the literary source material is present only as a flat echo, as though you can almost make out the original, compelling words.

To be fair, there is a honking fantastic climatic battle, even if it is just painfully out of place. Out of nowhere, the plinky-plunky score gives way to a techno beat, as an army of skeleton soldiers do battle with four giant tentacled beasts in the middle of a street carnival. Had MPHPC engaged in that level of WTF for the whole run time, it would have been more than a stupendously forgettable exercise in trying to crossbreed Harry Potter and the X-Men.

They say hating someone requires a form of passion, meaning the truest rebuke is not caring one way or the other for someone’s existence. Here’s your C-, Mr. Burton.