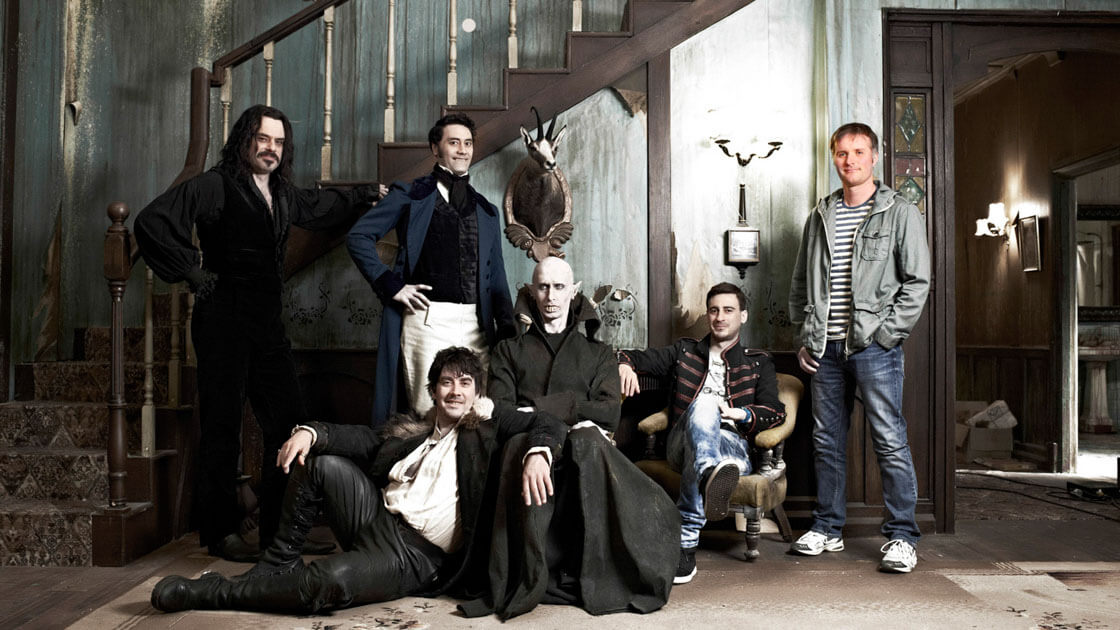 Has any supernatural creature had a rougher decade than vampires? “I mean, have you seen that sparkling British twerp? Just stake me already.” Dracula whimpers at his “Monsters Can Feel” small group, as The Mummy offers him some tissue. From Twilight to Dracula Untold, fanged fiction has been worse and worser. Happily, What We Do in the Shadows does more than just erase the crap path these immortal suckers were on, it proves there are still stories to be told in the dark.

Because the gang likes to occasionally play with their food, they invite Nick (Cori Gonzalez-Macuer) for dinner…Nick not realizing he is said dinner. He escapes being totally devoured, but winds up turned into a vampire. Problem is, Nick sucks, and not in the way his new friends do. He’s whiny, lame and keeps bringing unwanted attention to the group. At least he also brings around Stu (Stuart Rutherford), who is such a good dude the vampires kindly agree they won’t eat him. Stu is so nice, he even shows them how to use the Internet. Among the first thing the group does: Watch a sunrise on video.

That’s the sort of thing that makes Shadows so very good. The sunrise thing? It’s kind of poignant. Combine this with scenes of arterial blood that sprays as if fueled by a firehose, and you have a movie that’s willing to do whatever the hell it wants whenever it wants. Anything is fair game, including a particularly hilarious but insightful discussion by Viago about how he tries to make sure his victims have a really nice time with him before he kills and eats them because, hey, they’re going to die, you know?

It will come as no surprise that Clement is the strongest of the group, as his first words as a baby were probably said in deadpan. Only he could give an “MTV Cribs” type tour of his torture dungeon and procure so much laughter. The werewolf pack, led by Anton (Rhys Darby), steals the few scenes they’re in, while the whole film is anchored by Waititi’s endearing Viago, who has a splendidly sweet (and riotously funny) send-off.

What We Do in the Shadows, which began life in part on Kickstarter, is the type of inventive, original film that major studios are now far too risk averse to even consider. Crowdfunding and movies may have a strange, sometimes gross relationship (I’m looking at you, Zach Braff), but it may be the only way films like this one still get made. However it got made, thank God it did, because vampires couldn’t take much more of this shit.