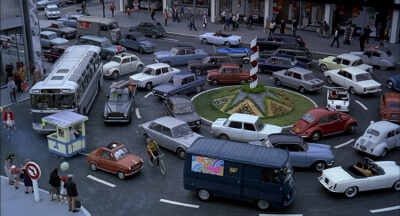 Whenever I’m asked what my favorite film is, Jacques Tati’s Playtime is the title I blurt out. And when all’s said and done, that’s for one simple reason: there’s just no other movie experience like it.

Playtime is a lot of things. It’s a virtually wordless movie that’s inconceivable without its sounds. A razor-sharp reproach of reckless modernization, delivered almost invisibly, with a touch so gentle I hesitate to call it a “touch” at all. It’s the difference between looking at the brush-stroke details of life or taking in a full view of the canvas. Not least of all, it’s a picture that took a whopping nine years to make, and ended up bankrupting the usually commercially sound Tati.

But there’s nothing so serious about what makes the film so funny. To my knowledge, it’s the only real example of cinematic “people watching”. Like a living page from a “Where’s Waldo?” book, Playtime contains quite a lot of wide, uninterrupted shots, within which Tati gives us a plethora of busy, bustling scenes to explore. Even if the “central” character Monsieur Hulot (played by Tati himself) is in the frame, there are usually at least three or four other things going on that hold just as much of a rightful claim to our attention. I’d say I’ve seen it five or six times now and, though I always have my favorite corners of the screen to revisit, there’s something new to uncover on each viewing.

Because of that democratic-bordering-on-anarchic approach, the best way to synopsize this film is in terms of locations. We begin by observing the people waiting and working at the spotlessly clean airport. That takes us into the equally pristine city, where we skip between from an office building (or office labyrinth) to a convention center, where all the latest and most absurd technological oddities are on display.

As night falls, we move to a suburban apartment complex, where we observe from outside, peering through several huge windows. Then on to a new, in fact not entirely completed nightclub on its opening night. Playtime‘s frenzied version of a climax comes here, before its mesmerizing finale is staged in the middle of rush hour traffic the following morning, on the way back to the airport where everything began.

Many infinitely entertaining figures come and go throughout this fictionalized Parisian business district (the massive, bank-breaking set for which is often dubbed “Tativille”). But the principal ones are the umbrella wielding Hulot, and an unnamed American girl (Barbara Dennek), sightseeing with a busload of fellow tourists.

Instead of getting right up close to inspect the world, the way movies are so well-equipped and uniquely able to do, Tati instead pulls way, way back to obtain similar insight. The miracle of Playtime is that, in doing this, it manages to celebrate each idiosyncratic individual it encounters while likewise embracing the whole swirling, messy mass.

It’s a notion of film potential that he’d suggested in the first Hulot outing, Les Vacances de M. Hulot in 1953, and began to explore in 1958’s Oscar-winning Mon Oncle. In all three of these films, Tati has an eye on detailing class differences – which wasn’t unusual for the time, though his refusal to moralize his characters still is. They also, in a completely modern way, revive a purely physical style of comedy and performance that hadn’t been put to such dazzling use since the silent era. But even with all the similarities, neither of the previous Hulot outings really indicate the kind of leap Tati would go on to make in 1967 with this film.

Playtime‘s formal and conceptual audacity goes a long way in explaining why it failed commercially upon its release. Even today, it can seem puzzling on a first viewing. Lack of box office receipts led to Tati’s bankruptcy, and the irreparable loss of his commercial clout in his final years. He made two more films: 1971’s far less interesting Trafic, and Parade, a wonderfully strange circus film made for Swedish TV in 1973.

Even if Tati didn’t make it out of his creation unscathed, the film itself has been able to survive several cuts and re-cuts, and exists for us today, complete and in-tact. Which is fortunate for us not only because Playtime is such singular, essential film, but also because it’s just so damn funny.