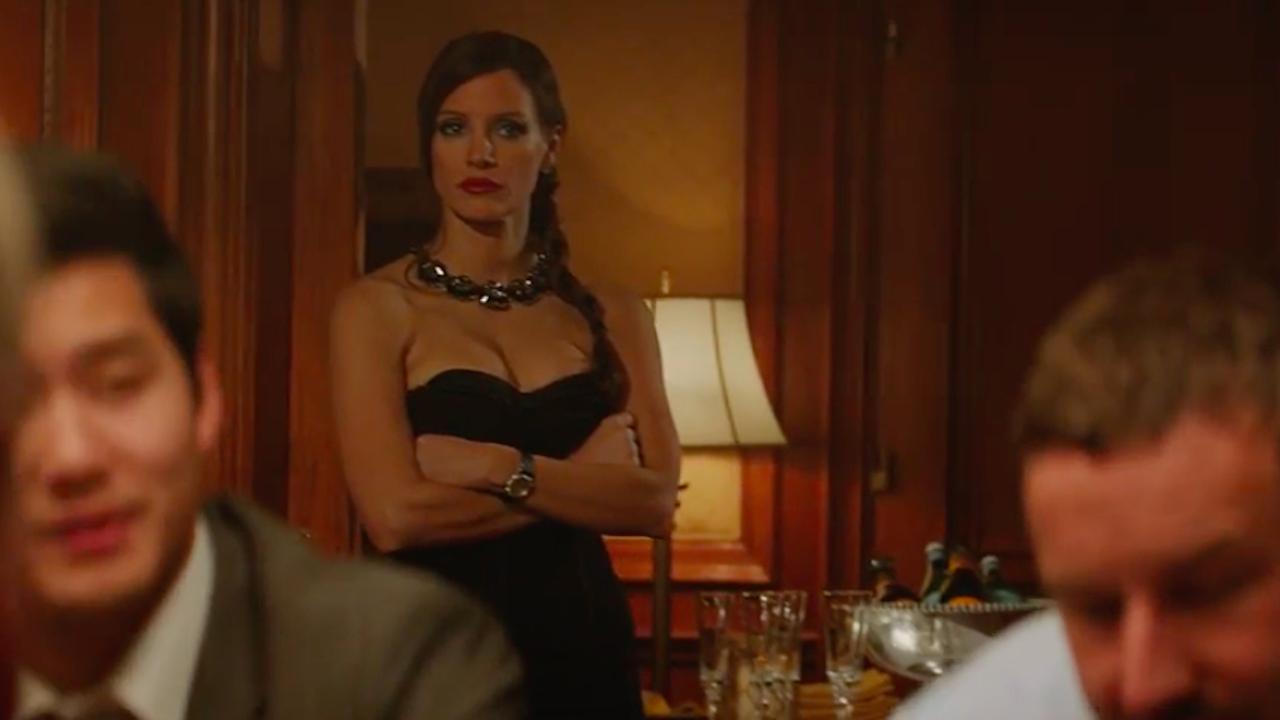 Word addict—and alleged woman knower—Aaron Sorkin’s directorial debut is so “on brand” for him that it is almost a parody. Molly’s Game features so much telling and so little showing that it’s basically an audiobook narrated by Jessica Chastain’s cleavage. With cinematography that explicitly ogles its lead, seemingly out of boredom due to all the action-free talking, what should have been a showcase for the brilliant actress feels more like a made-for-nonpremium-cable-TV reenactment.

Molly’s Game tells the real-life story of Molly Bloom (Chastain), whose unusual career path took her from the US Olympic trials in skiing to facilitating illegal poker games with uber-famous jerkwads. The bifurcated plot sees Molly and her reluctant lawyer, Charlie Jaffey (Idris Elba), slap-fighting the heavy hand of the justice system while detailing how she went from cocktail waitress to “Poker Princess.” The only way this threadbare amount of narrative takes up 140 minutes of screen time is with pointless dalliances that include a detailed education on spontaneous scoliosis, the intricacies of poker terminology and characters who answer every question in the form of an audition monologue for community theater.

Somehow, Molly’s Game manages to both overpraise and underuse its lead character. Most of the “action” occurs with Molly merely pacing in the background, as her monotone voice over meticulously describes everything we are already watching and understanding with our eyes and brains. As if embarrassed at the way the cinematography treats Chastain’s body as the subject of a Planet Earth episode, several characters hilariously overemphasize the virtues of the drug-abusing illegal-poker impresario. Although stupidity may keep him from donning 007’s tux, Elba’s emphatic, believable delivery on a line suggesting Molly’s refusal to snitch should put her “on the cover of a Wheaties box” proves he has a license to kill overwrought dialogue.

That speech of Elba’s combines with Costner’s impossibly stupid arrival in the third act to demonstrate (again) Sorkin’s inability to grant the women he writes the agency they deserve. Instead of Molly eloquently arguing for her own emancipation, her male lawyer does it for her exactly one scene before her psychologist father shows up to dismiss her every motivation as “daddy issues.” The film culminates with a teary-eyed Molly quietly watching two men defend and define her. Maybe it should have been Molly’s Dad and Lawyer’s Game, Also Featuring Molly.

As negative as all this sounds, the experience of listening to the rhythmic patter of Sorkin’s language is so relentlessly pleasing that it’s impossible to outright dislike virtually anything he does. Should there have been more poker playing in a film about illegal poker playing? Yeah. Should an hour of bloated minutiae been cleansed to make a lithe, fun ditty instead of a weirdly somber opus? Definitely. Does it remain watchable because two Sorkin characters talking is like watching grandmasters play chess? Absolutely. Molly’s Game is not the award-show vehicle Chastain deserves nor the breezy, cheeky exploit that it should have been, but it is a passable fix for dialogue junkies and Elba enthusiasts.