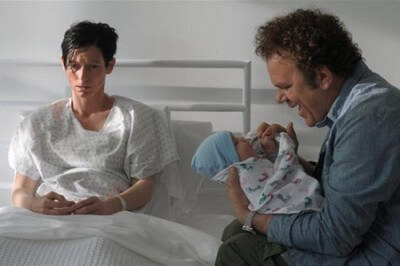 If done poorly, films that attempt to softly contextualize the actions of murderers and sociopaths are more than just failures; they’re dangerous. They inadvertently feed into America’s occasional obsession with fetishizing homicide, perpetuating a culture in which real-life killers can almost always bank on achieving a measure of fame for their crimes. Writer/director Lynne Ramsay’s We Need to Talk About Kevin flat out embarrasses films like those, demonstrating that it’s possible to explore the humanity of a murderous situation without making a carnival out of it.

This is, in part, because Ramsay’s eye is trained not on the killer, but on his mother. Tilda Swinton plays Eva Khatchadourian, a woman for whom motherhood was a rotting albatross carcass hung around her neck. She loves her husband, Franklin (John C. Reilly), but her pregnancy was an unwelcomed accident that rendered her lifelong aspirations secondary. Which might not have been so bad, if her son wasn’t a vile, awful prick from birth.

Even as an infant, Kevin seems to sense his mother’s disdain for the concept of his existence, as he wails and moans whenever he feels her presence. As a child, Kevin (Jasper Newell) moves from difficult to evil, playing mind games with his mother that involve self-defecation and baiting her into abuse. Finally, as a teenager, Kevin (Ezra Miller) succumbs to the inevitability of his true self and becomes a full-fledged murdering monster.

But even though his name may be in the title, this is not Kevin’s movie: It’s Eva’s. Told in a jumbled chronological order in which everything seems to be happening at once, which is how it must feel for a woman whose womb once housed a maniac, the film asks such terrible questions. Are some kids just born bad? How much do blame does a loveless mother deserve? Eva’s answer to the latter seems to be quite a bit, as she spends the bulk of the movie enduring the sometimes physical retribution paid by the families of her son’s victims and inflicting penance upon herself.

Swinton’s performance is the kind that renders praise stupid. Opinions on the film overall may vary, but the greatness displayed by the lead actress transcends perspective and is simply fact. At times we resent Eva; her cold, selfish demeanor and contempt for her son’s very existence is repulsive. But in other moments, we simply pity her, for what could anyone do to curb the behavior of a human being seemingly built to destroy?

Ramsay is ultra-heavy-handed here, with blood red color strewn somewhere in nearly every scene. Points about nature versus nurture are driven home by jackhammer. Still, the exceptional, almost nightmarish composition of chronology blends with a truly unique set of characters to deliver a singular experience like few others out there. This is as much a horror movie as a drama, as much a thriller as a character sketch. In other words, you don’t just need to talk about We Need to Talk About Kevin; you need to see it.