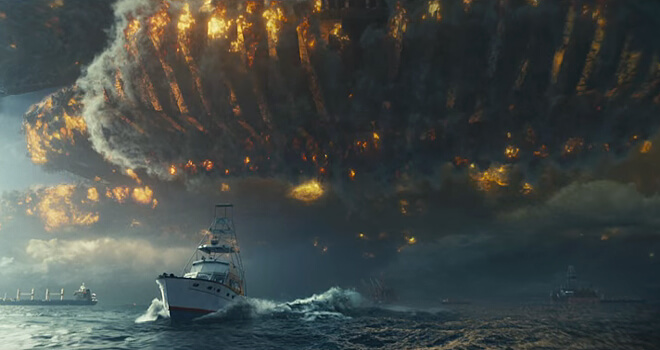 The exhaustive brilliance of both Mad Max: Fury Road and Creed means you can’t dismiss a sequel outright just because of a decades-long gap between it and the previous installment. Unless, of course, it is directed by Roland Emmerich, who isn’t so much a filmmaker as a feces-smearing finger painter. Independence Day: Resurgence is expectedly dumb but surprisingly ugly, with computer-generated chaos replacing anything resembling comprehendible action. Apparently, it took five writers to come up with “but what if everything was bigger?”

Picking up exactly 20 years after the original, the plot of the movie is that the aliens come back. With a bigger ship. And one of the aliens is way bigger. That’s it. It took five writers to come up with that and one good character beat where a pilot pees on an alien ship while flipping them off. Nobody should get a Writer’s Guild credit for this collection of reckless adjectives and verbs.

All the new characters were purchased at the “stock character” shop. You’ve got roguishly charming fighter pilot, Jake Morrison (Liam Hemsworth); son who is trying to live up to his father, Dylan Hiller (Jessie T. Usher) and doting girlfriend who can still kick a little butt (not a lot of butt, only boys can kick a lot of butt in movies like this), Patricia Whitmore (Maika Monroe). They join Jeff Goldblum, playing a character whose name isn’t Jeff Goldblum but who should just be called Jeff Goldblum, and Dr. Brakish Okun (Brent Spiner), General Adams (William Fichtner) and President Whitmore (Bill Pullman) from the original. Missing, of course, is Will Smith, whose character is given a humiliating off-screen death and a fake honorary painting.

The only things that work here are the weird parts. The pleasurable insanity of watching an African warlord (Deobia Oparei), dressed in militia gear, killing aliens with machetes in space can’t be understated, nor can the unoriginal-but-cool presence of an orb representing another alien race. But most of the movie is just “we only have one shot, let’s make it count” and multiple countdown clocks. Even in terms of spectacle, the movie manages little, substituting volume for verve. The number of times characters state aloud “that’s huge” or “this is even bigger” is hilarious. As we all know, size only matters when it comes to the hands of presidential candidates.

Look, Independence Day: Resurgence was never going to be good, only potentially fun. Much like those of us with English degrees have been told, that potential is wasted. It’s fitting that a film this colossal and misguided believes itself to be truly awesome. You can tell, because the final moments explicitly attempt to set up a sequel nobody will be begging for now or in 20 years. Presumably, if there is a third film, it will require 17 writers, feature a spaceship the size of two earths, sport characters that are literal stick figures and still have Jeff Goldblum fully Goldbluming.