Home » Film » Muck of the Irish 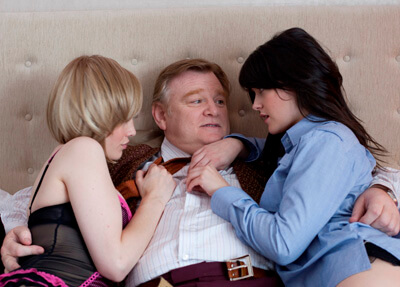 Writer/director John Michael McDonagh’s debut feature, The Guard, begins with a scene where a tired old Irish cop (Brendan Gleason) inspects the scene of a fatal car wreck, finds some LSD in one of the victim’s pockets and pops it in his mouth before offering a cold, expletive-laden greeting to the day.

It’s the sort of studied, exaggerated aggression that might have seemed anarchic and exciting a decade ago, as in Lock, Stock and Two Smoking Barrels or The Boondock Saints; the first 20 minutes or so of this movie are saturated with that stuff. But strangely, the tone changes pretty quickly, and The Guard doesn’t end up being nearly as growly as all that.

A hulking man, with a sculpted mess of red hair above his protruding ears, Gleason looks like the quintessential Irishman. Harry Potter fans may know him as Alastor “Mad Eye” Moody. Here, he plays Sergeant Gerry Boyle, the grumpiest (and apparently only) cop in a sleepy West Irish village.

Or at least he’s pretty crusty in the beginning, when he’s introduced to his short-lived partner, McBride (Rory Keenan), and the two investigate a murder. But when that murder ties in with a large drug-trafficking investigation that brings FBI agent Everett (Don Cheadle) to Ireland, Boyle inexplicably loses much of his edge and turns into a big, harmless lug.

So Boyle, the provincial veteran, is our fall-guy and the whip-smart city cop Everett is our straight man. But the most tiresome retread has to be our nefarious drug slingers, made up of the well-dressed and well-read Clive (Mark Strong) and Francis (Liam Cunningham), and their doltish associate Liam (David Wilmot).

For a crime movie, there’s surprisingly little excitement: things generally plod along exactly as expect, but with less violence. The Guard does have Gleason, and a few bits of bone-dry wit here and there. Few being the operative word; it isn’t half as funny as some may lead you to believe.

If you see it, see it for Gleason. Even though the writing somehow makes it seem like everything Boyle does is out of character, Gleason’s performance is irresistibly charming. Cheadle also helps to breathe some fresh air into the all-too-familiar character types and genre style. But his performance, in tune with the rest of the picture, is off as well. His agent Everett is performed without the kind of bold confidence we’ve come to expect based on his previous work, as if he wasn’t quite able to figure out exactly who this character is.

The ways in which it fails to be a comfortable retread of the crime comedy genre unfortunately yield nothing new to praise.  The Guard is a long chain of clichés made interesting only by the fact that none of them are executed convincingly. In other words, if all the pieces had moved together the way we can assume they were intended to, it’d be less striking but definitely more entertaining.