Home » Film » The Rise of the Murder Dads 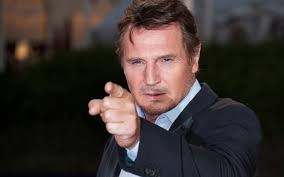 To be fair to Liam Neeson, who among us hasn’t confessed to being possessed of a racist, murderous rage when asked an innocuous question at a press junket for a movie about a killer snowplow driver? When given a chance to clarify his WTF, Neeson proved why actors have smarter people write what they say. From immediately asking his friend the skin color of the man who raped her to Neeson’s instinctive reaction to hurt any black man for the alleged actions of one black man, it’s a cornucopia of violent bigotry that dude still doesn’t seem to fully grasp.

Yes, this is the film section, I promise. Hang with me.

Countless people far better qualified to speak on Aslan’s racism, like Dustin Seibert of The Grio, have and will better unpack the discriminatory origins and implications of what Neeson Qui-Gon-and-done. That is, and should remain, the top story. But there’s also something else here, something that falls far more under the banner of “movie criticism.” That is to say, an actor who has had a career renaissance making escapist, violent, revenge-fantasy movies — “Murder Dad” movies — had an IRL violent, revenge fantasy.

Loving violent movies doesn’t make you a violent person any more than liking sci-fi makes you a xenomorph. That said, if the point of view Americans are expressing in a growing body of narrative fiction indicates that value and honor are placed on murderous revenge, we really need to understand what that means. I’d say Neeson is the “poster boy” for this genre, but he’s like 15 feet tall and 85 years old. So he’s the “poster Un-Jolly Green Giant,” the patron saint of “dads who think they could totally kill that one guy who looked at their daughter wrong.”

Unlike the attitudes espoused by Akira Kurosawa and other Eastern artists, Western slants on revenge opuses almost exclusively come down on the side of the brutality being worth whatever price is paid. In fact, from Beatrix Kiddo to Angry Phone Man, or whatever the hell the dude from Taken’s name is, the protagonists often survive their payback-murder sprees. “Dig two graves” suggests the futility of revenge. “Dig graves for lots of other people” is not exactly a message designed to shame those who, like Neeson, actually fantasize about bludgeoning those who have done them wrong.

At a time when America is failing miserably at coming to grips with the violent wickedness of angry white dudes who are convinced that shit has been unfairly taken from them, it seems like maybe we should be paying attention to the growing body of “AARP-members-killin’-for-justice” movies. This isn’t to condemn escapism itself as a concept. I think literally all of us would much rather have revenge enthusiasts binge-watching Nicholas Cage movies at home. However, failing to genuinely reflect on what this storytelling says about our culture means missing a story that damn sure needs to be told.

So here’s my reflection: The presupposition made in most Western revenge films is that the motive in question is just and fair. Life is rarely that clean or clear. Neeson’s profitable Murder Dad movies are an expression of the underlying belief among many Americans that the anger they feel about their situation is justifiable. More concerning, they believe they can and have correctly identified the people who are to blame. They are wrong. The beliefs are usually based on bigotry, systemic racism, or outright lies. What I wouldn’t give for a big-budget American movie that shows a Murder Dad who gets it wrong, slaughters innocent people, and then discovers that he is the real monster.

Anger is an important emotion that can be incredibly useful in the pursuit of personal and social improvement. Revenge is a twisted concept that is inarguably idealized in a great number of our modern movies, including Neeson’s latest. Communicating through narrative art is important, both listening and sending messages back. There’s a reason Mad Max: Fury Road is a graceful, important revenge movie and Angry Crew-Cut Slaughters Those Who Did His Family Wrong is a ringing alarm bell that we ought not ignore.