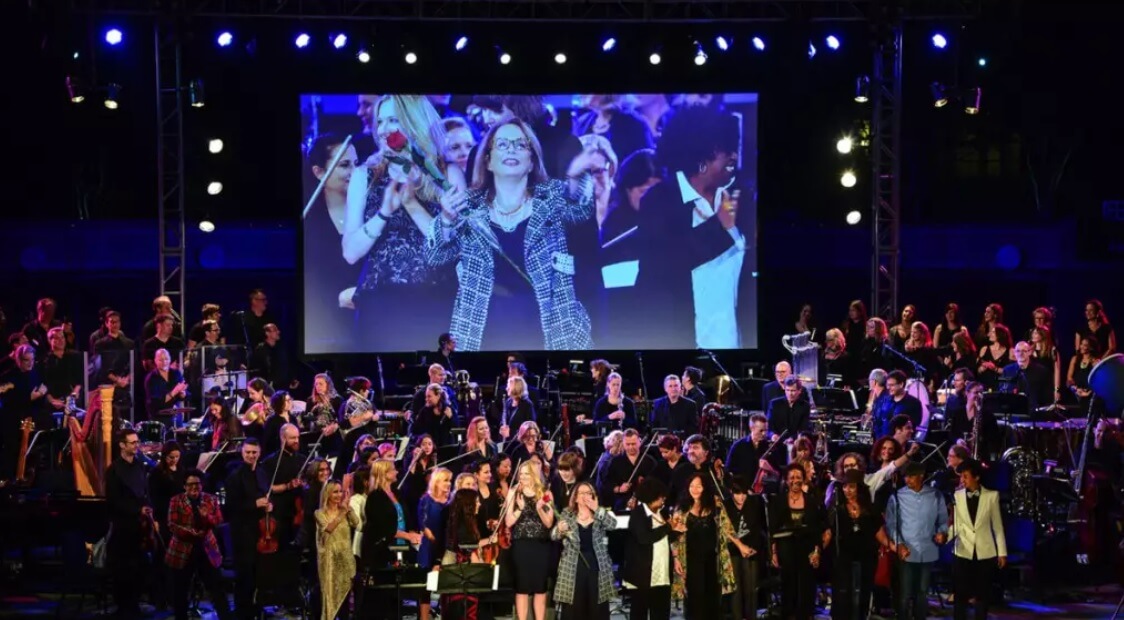 That loud, sturm-und-drang “bwaam” noise that punctuates every sci-fi/action movie trailer like a flatulent robot is the unofficial sound effect of toxic masculinity. Its omnipresence is not merely a sign of the unoriginal copycat-itis that represents Hollywood’s major birth defect. It is also a reminder that the makeup of movie composers is hella homogenous: dudes, dudes, dudes, as far as the eye can see! In fact, according to insane statistics heralded roughly as infrequently as major drug trials for conditions that primarily affect women of color, no other artistic cinematic profession is as exclusionary of women as film composing.

Congrats on Your Composing Oscar, Bro!

Dr. Martha M. Lauzen’s annual Celluloid Ceiling report is the most important film news that never gets enough attention and is sure to make you feel like you’ve just downed a slurry made of Michael Bay gems. Brace yourself with a sharp swig of something strong and then swallow these digits.

Here’s how many women accounted for various roles in the top 250 films of 2017:

Like a refresh of Donald Trump’s Twitter page, those appalling numbers are totally expected and yet somehow still feel surprisingly awful. Also just like Trump’s presidency, brace yourself because we’re not done yet. Rachel Portman became the first woman to win a composing Oscar for Emma in 1997. Anne Dudley followed behind Portman with her win for The Full Monty in 1998. They are two of only four women who have ever been nominated in that category. Last year, 141 scores made the shortlist for Oscar. Of those, just five were composed by women. “It gets worse” should really have been the title of this piece, because it gets worse here! Two women were on that shortlist multiple times. So in total, exactly three women were considered for this Academy Award last year.

How bad is it for women composers? Lesley Barber, who composed the score for Manchester By the Sea, showed up for an interview to promote the movie, and someone confused her for a publicity person and not the composer. I’m going to assume that “someone” has a name that rhymes with Schmasey Battfleck. As Kathryn Bostic, who provided the incredible music for the feature film version of Dear White People, told Variety, “The biggest issue has been that we are not even in the conversation.” Hooray for yet another uncomfortable women’s cycle nobody talks about in public? Without award nominations or acclaim to raise the profile of women composers, they struggle to get work. Without work, they can’t get nominations.

Literally the only good thing about this whole discordant mess is that at least part of the fix is awareness and attention, which you’re giving the situation right now. In fact, let’s stay quasi-positive, which is the highest level of optimism currently legally allowed!

Stop what you’re doing and watch director Sara Nesson’s short documentary Women Who Score right now! Sorry, that was way too bossy… I just get stupid excited about people who are actively trying to change things that are stupendously terrible and unfair, and Nesson’s doc is a 12-minute “eff you” to anyone who thinks women can’t do this job. It contains excerpts from a concert that featured work by 20 women composers and also highlights the efforts Miriam Cutler, who helped found The Alliance for Women Film Composers.

That organization does basic, kick-ass things like provide a directory. Now when producers say they can’t find women composers to even consider, it’s provably bullshit! Even if you’re not a woman who composes music, you can support the organization with a donation. They have a Twitter feed that promotes scores by women, host numerous events and generally work to bring attention to this almost completely ignored disparity. Follow and retweet them, donate to them or do whatever you can to raise awareness. That’s right, you walked into a film section and stumbled into a call-to-arms! Your arms are now officially called!

See the thing is, not only are women missing a chance to create, we are sorely missing the sound that only they can provide. Although it pales in comparison to the frustration and challenges women composers face trying to breakthrough in an industry that has no interest in making room for them, cinema is lesser without their voices. We lovers of film ought to want equality as much out of a selfish desire to hear new sounds as out of a passion for equality itself. I’m just saying, if Marvel wants to avoid having all its movies sound exactly the same, maybe put give a woman a conducting staff and not just spandex.