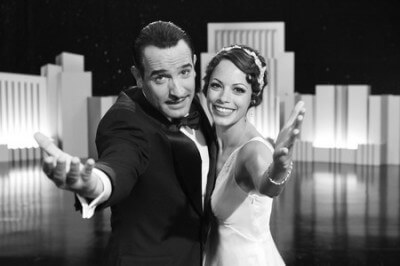 It’s fair to say that writer/director Michel Hazanavicius’ latest film, The Artist, is predicated entirely on a single gimmick. Oh yes, its overall conceit is a ruse, a con, a flim-flam sleight-of-hand designed to distract from a gossamer plot and startlingly unoriginal characters. And it pretty much works.

Since it first hit the festival circuit, this black-and-white silent film has been generating major awards chatter, but not without a vocal minority decrying the work as a trifling novelty. These opinions are actually not truly in opposition to one another; The Artist is at once both insignificant and terribly charming, featuring a brilliant lead performance delivered through a whimsically novel but meaningless approach.

Although it may have been ballsier to make a silent film that wasn’t actually about silent films, it’s a wonder The Artist got funded as is. Set in Hollywood in 1927, we meet George Valentin (Jean Dujardin) at the height of his popularity as a silent film star. Dapper and mustachioed, George is such a narcissistic ham that his own wife (Penelope Ann Miller) spends her time defacing pictures of him in magazines. Blessed with eyebrows that practically deliver dialogue and an epidemically contagious smile, George is on top of the world, until he meets Peppy Miller (Bérénice Bejo).

Their attraction is immediate but complicated by his marriage and her rise to popularity in “talkies,” the new genre that renders George obsolete. When he’s unceremoniously dumped by the head of his studio (John Goodman), George tries to bankroll his own silent epic, which crashes and burns as hard as the stock market on black Friday. Those two events combine to leave George penniless and at the mercy of his now estranged seeming soulmate, Peppy.

The relationship that is supposed to buoy and center the film is easily its clunkiest and lamest facet. For the first hour, George and Peppy share the same frame for a slender few moments, and most of that is their goofy “meet cute” introduction. As years tick by, the luminous and doe-eyed lass somehow remains smitten, even though the pair never communicate and he’s become a suicidal drunk whose only friend is a quirky dog. Hazanavicius spends far, far too much time detailing George’s pride-fueled downfall and nowhere near enough time building a fathomable couple.

This isn’t to say Dujardin doesn’t make the most of his ample time. It may be filtered through a gimmick, but his performance is the real deal, as he believably carves out a sympathetic and troubled character. Bejo, who is so classically beautiful someone should be penning a sonnet about her as we speak, isn’t given much to do but be adorable. And speaking of adorable, just try to resist Uggie the dog.

With a spectacular score by Ludovic Bource that should win all sorts of awards, as it basically did the work usually left to dialogue, The Artist says nothing new but charmingly emulates something old. It’s fitting that the one phrase spoken by Dujardin summarizes the way the film should be approached: “With pleasure.”