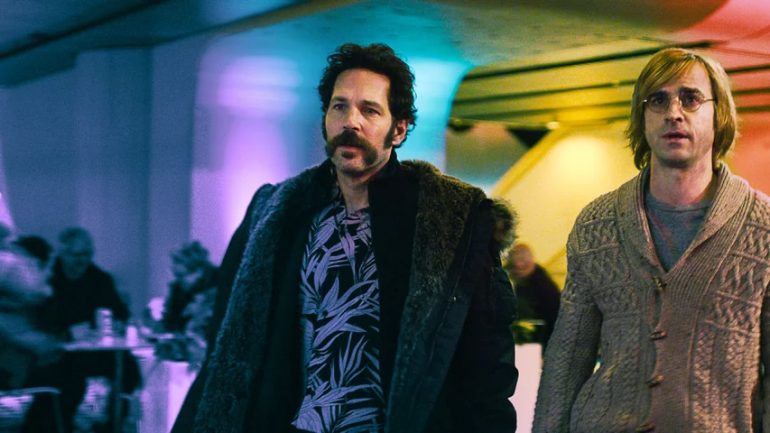 What will Amish people do in the future? It’s a question we all ask ourselves from time to time. I mean, who doesn’t look at the grossly polluted, technologically miraculous, neon cityscapes in Blade Runner and think to themselves, “Wait a minute! What’s going on with the Amish?” Writer/director Duncan Jones finally has an answer: Amish people in the future will beat the holy piss out of you with a souped-up table leg if you say mean stuff about their girlfriend. I won’t pretend that I’m the official knower of all things Amish, but I definitely didn’t see that coming.

By now, you probably heard about Netflix’s new film Mute because of all the press regarding its horrendously awful RottenTomatoes score. Yes, Mute is bad. No, Mute is not “9% score on RottenTomatoes” level bad. It’s just barely bad. There’s a lot of goofy fun to be had, although it never quite comes together. For example, watching an Amish guy behind the wheel of a getaway car that he doesn’t know how to drive isn’t simply thrilling action—it’s actually kind of fascinating. I wish the rest of the film was just as clever and fun. Except, as far as I can tell, it’s really the only scene in Mute that actually does something exciting with the concept of “Amish in the future.” I needed more after being teased like that.

Mute is a futuristic neo-noir mystery set in 20160 about a silent Brobdingnagian searching for his girlfriend with a shady past after she goes missing in Berlin. Alexander Skarsgard is miscast as Leo, the big guy whose modest Amish roots hide a fierce internal rage. A silent lead role needs an actor who can create a character almost entirely through their expressive eyes, and I’m not sure Skarsgard knows how to do that. He sells some of the “big softy” stuff, but when his anger is about to explode, he does the thing where his face turns red and his entire body trembles. It’s actually one of my biggest acting pet peeves because it looks so stupid. Hey, actors: Stop doing it—like, right now.

Anyway, Leo’s search for Naadirah (Seyneb Saleh) has something to do with a pair of black market surgeons, Duck (Justin Theroux in a surprisingly convincing wig) and Cactus Bill (an Oscar-worthy performance by Paul Rudd’s mustache). Leo “Hulks out” a few times, Duck and Cactus Bill are up to all sorts of shenanigans with violent undertones, future Berlin looks a bit more like Blade Runner than countless other films that rip-off Blade Runner and that’s the movie. There’s not much to it.

I’m surprised that I didn’t like Mute. I love sci-fi films that are unapologetically silly. I was on board for most of the film but, by the end, I was completely unaffected by what I just watched. Mute is now streaming on Netflix. If you’re the type of the person who digs wacky sci-fi, I still recommend that you check it out. We don’t see many films like it anymore. If you’re not a big fan of this type of stuff, then Mute won’t be the film that converts you. Either way, don’t pay attention to the dismal RottenTomatoes score. Mute isn’t that bad. It’s just not very good.