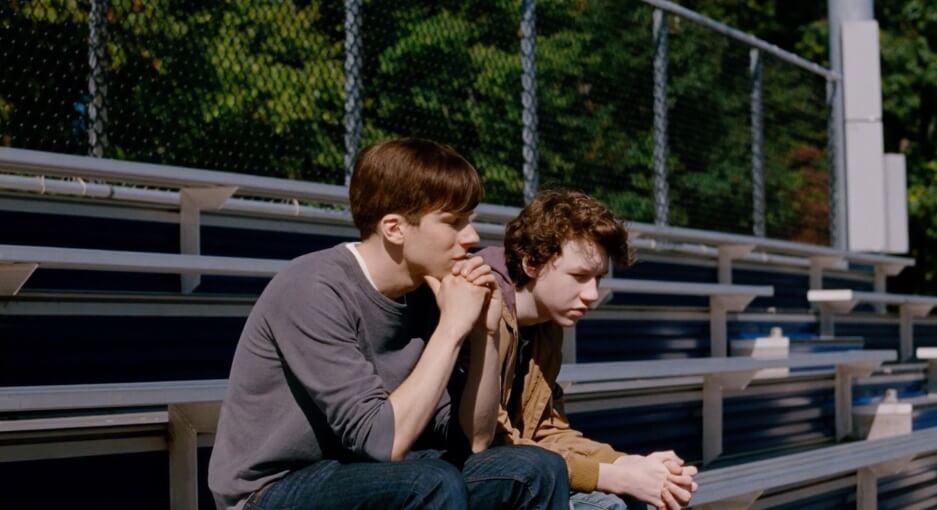 Sometimes it feels like a bad film is picking on you. What could I have a possibly done to director Joachim Trier to make him single me out like this? Before his new film, Louder Than Bombs, I was positive that I’d never met Trier. Now, I’m paranoid that I may have inadvertently wronged him in the past. What else could explain why Trier would direct film that is a conglomeration of almost everything that I hate most about bad movies?

Louder Than Bombs tells the story of three caricatures mourning the death of a slightly more interesting caricature. Isabelle (Isabelle Huppert) was a renowned combat photographer who died in a mysterious car “accident” three years ago, leaving behind a husband and two sons. Now, a major exhibition of Isabelle’s work is about to debut and a journalist plans to reveal the circumstances of her death, which means her widower, Gene (Gabriel Byrne), will be forced to admit the ugly truth to his youngest son, Conrad.

Conrad’s older brother is…another caricature: a brilliant college professor and new father. I’m still not sure why Louder Than Bombs felt it was necessary to include Jonah (Jesse Eisenberg), as the character’s only purpose appears to be giving Eisenberg a platform to deliver a performance that, somehow, is worse than Eisenberg’s infamous appearance in Batman v. Superman. Jonah’s arc (well…“arc”) feels entirely disconnected from the rest of the film, and he’s easy to forget about when he’s not on-screen.

Gene, Conrad and Jonah’s characterizations are limited to their positions within the family and their job titles, plus their varying degrees of moping. An overwhelming number of flashbacks and dream sequences (my least favorite storytelling technique) from each of their perspectives reveal different aspects of Isabelle, who is only the most interesting caricature of the bunch because she has the coolest job. By the end, she’s only revealed to be enigmatic and vaguely in pain…so really, not much of her is “revealed” at all.

Louder Than Bombs contains most of my least-favorite things: a trivial coming-of-age story, an offensively stupid meditation on grief, a dull stage for unsympathetic caricatures to be sad around each other and a bunch of dream sequences that are mostly intended to look cool, instead of providing real character development…and they don’t even look cool. The films only redeeming qualities are the performances of Byrne, Druid and Huppert, who manage to make the most of their lousy roles.

Joachim Trier, I’m sorry if I ever wronged you in any way. If I did, please know: Louder Than Bombs is enough punishment.