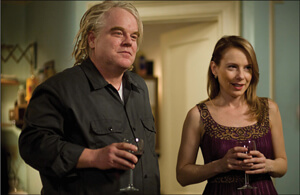 It’s a little known non-fact that Philip Seymour Hoffman has had a role, big or small, in every movie ever made. If you don’t believe me, just look for his cameo as “cherubic South Carolina racist” in Birth of a Nation . We all knew it was just a matter of time before he applied his considerable talents behind the camera as well, as he did in his directorial debut Jack Goes Boating , an introspective little flick about two couples — one falling into and the other falling out of love. In Jack Goes Boating , Hoffman plays the unlovable Jack, an underemployed reggae enthusiast who’s barely scraping by — financially and socially — in New York City. His best friends are Clyde (John Ortiz) and Lucy (Daphne Rubin-Vega), who are experiencing marital turmoil. In an effort to hook up Jack, Clyde and Lucy arrange for him to meet Lucy’s co-worker, Connie, played by Amy Ryan (who may be best known for her role as Michael’s love interest Holly Flax on “The Office”). Despite an awkward first date at Clyde and Lucy’s house (which foreshadows the “smoke pot then cry then lock yourself in the bathroom” cycle that appears later in the film), it’s practically love at first sight for this unlikely couple — he a mouth breather who’s often at a loss for words, and she a physically attractive woman who’s carrying some heavy baggage in the way of intimacy issues. In a way, they’re perfect for one another: Connie is put off by aggressive advances and Jack seems so mired that the word “advance” isn’t in his vocabulary. As Jack walks her home in the snow, Connie mentions that she would love to go boating someday. Being the sweetheart he is, Jack agrees to take her, despite being unable to swim. The rest of the movie is mostly occupied by Jack’s swimming lessons, facilitated by Clyde, and Jack’s preparation for a dinner he’s planning to cook for Connie. As actors, Hoffman and company are as perfect as their characters are flawed, likely owing to Hoffman, and with Ortiz and Rubin-Vega playing the same roles in the stage version of Jack Goes Boating , written by Robert Glaudini. At its heart, the movie isn’t far removed from the play. This is great from a dialogue and character standpoint — the biggest (and only) drawback is that with its glacier pace and cramped New York City apartment settings, the film often doesn’t feel very cinematic. For this, Hoffman is likely unapologetic. The film seems to prize its subtlety and delight in its ability to make the viewer uncomfortable, the camera unflinchingly lingering on a character’s reaction far longer than is socially acceptable. Despite its maritime title, Jack Goes Boating is a dry, naval-gazing romance that really hits its stride in its manic final act, when clichés and expectations are tossed out the window and everything comes unglued. The result is sincere and strangely uplifting, an impressive directorial debut from an actor with an impressive body of work. Grade: B+