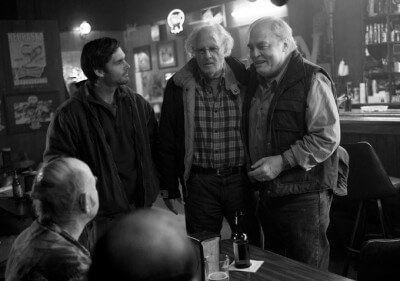 I like Alexander Payne. I really do. His ability as a director to mine for subtle laughs others would leave buried is as pleasant as his now-signature genre of “middle-aged-and-older men having muted epiphanies.” I guess I just miss the Citizen Ruth/Election-era Payne, the one who found a way to wedge his unique and deft style into an issue as big as abortion or as out-of-place as high-school politics. Those first two films smacked of an ambition he hasn’t displayed since, opting instead for the comfort of subtle relationships and modest personal revelations. And that’s nice, it really is; but if a film is doggedly determined to be subtle, how can one have an extreme reaction to it?

Nebraska is Payne’s fourth consecutive “reflections on an average white male life while on the road” film. When Woody (Bruce Dern), a crotchety wisp of an elderly man, gets a magazine sweepstakes letter telling him he “won” a million dollars, his increasingly addled mind becomes obsessed with it. After escaping the watchful eye of his wife, Kate (June Squibb), he tries walking from Montana to Lincoln, Nebraska to claim a prize that only he believes is real. Eventually, he wears down his son, David (Will Forte), who agrees to drive him on this fool’s errand.

The pair winds up stopping in Woody’s old Nebraska hometown, a place most of his family never left. There, Woody confronts old rival, Ed Pegram (Stacy Keach), while David gets a better look at the people his parents were. Between the haunting tour of Woody’s now-abandoned childhood home and the way his family goes from docile losers to bloodthirsty vultures at the prospect of Woody’s completely fictional million dollars, Nebraska acts as shorthand to understanding a way of life to which those outside the Midwest are probably oblivious.

Writer Bob Nelson clearly understands the psyche of a small town as well as Payne knows how to shoot one. But Nebraska isn’t a defense or a condemnation of that fading way of life. Neither is it an indictment or pardon of alcoholic fathers and shrewish mothers. It just takes a black and white snapshot, a cinematic selfie, and leaves it there. There’s little to provoke any measurable reaction, save for Nelson’s weird inclusion of a lame sexual assault/rape joke that gets repeated.

Nebraska is a good film. Sometimes, it’s quite good. But it isn’t ever great, and I’m beginning to consider if that will remain the pattern. Payne appears incapable of ever making a bad movie; but I have to wonder if he has a great one still in him.