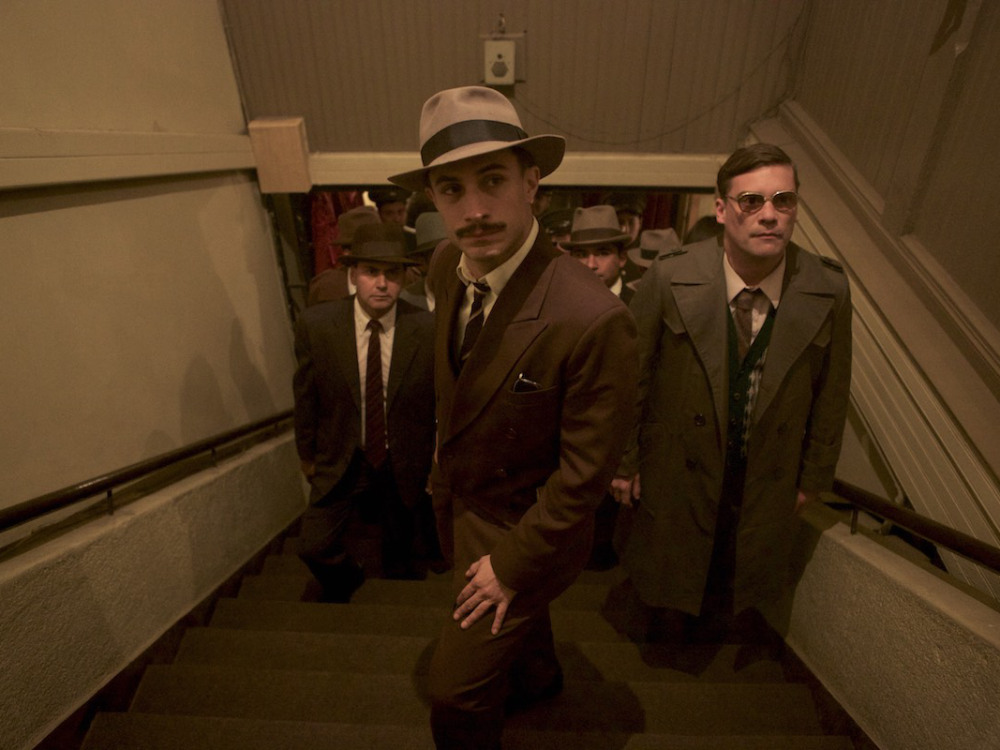 I hesitate to write the word anywhere near his name but maybe the only “endearing” quality about Donald Trump is that artists have an uncanny ability to get under his skin. If America really is going to do the whole “throw a tantrum over the rapidly changing demographics of our country by electing a white nationalist as president” thing then at least we’re doing it with a man-baby who artists can poke and prod. In times like these, it’s hard not to have a soft spot for films like Neruda.

It also helps that the film is pretty brilliant.

Neruda is directed by Pablo Larrain, and it feels a lot like a companion piece to his other 2016 film Jackie. Both films are dreamlike “biographies” that don’t get bogged down in actual facts but use their historical icons as jumping-off points for Larrain to tell his more personal stories. In Neruda, Larrain references the actual history of a poet-turned-politician on the run from an oppressive government to explore how we use art to “create” other people—which is exactly why it pisses off people like Trump.

The film follows a nontraditional game of cat-and-mouse that is presented as if the surrealist poet Pablo Neruda might have written it himself. A manhunt ensues after Neruda (brought to life by an incredible performance by Luis Gnecco), who is a communist senator, openly criticizes the anticommunist president leading Chile in 1948. Neruda flees underground and is pursued by Oscar Peluchonneau (Gael Garcia Bernal), a police inspector we’re always just on the verge of taking seriously before we’re reminded that he’s a goof.

A great example of how the film isn’t a typical biopic is how it’s called Neruda and yet Peluchonneau steals the show. Bernal’s best performance yet feels like a throwback to the characters of Dr. Strangelove; he’s a government tool who accidentally failed upward because of said “toolness” going unnoticed by other tools, yet his utter cluelessness is oddly dignified. Neruda’s advantage throughout the manhunt is that Peluchonneau is so basic that he’s pathetically predictable; however, even the bumbling inspector is smart enough to realize Neruda is “writing” the chase and taunting his oppressors.

The cast is exceptional, including Mercedes Moran as Neruda’s wife. The performances are enough to make the film worthy on their own, but the look and feel of Neruda really takes it to the next level. Larrain uses the same poetic visual language as Jackie, but it works much better this time around because he draws attention to how film and poetry share an ability to better communicate deep feelings instead of complex ideas—making them a perfect foil for politics. Neruda uses his artwork to truly “create” and undermine the people around him, while Larrain creates Neruda by presenting the legend he’s become instead of the actual person.

That’s why artists can mess with Trump so easily. He spent his entire life meticulously branding himself and cultivating a “powerful” persona; thus, it really, really bothers him when an image of his face photoshopped onto the poop emoji goes viral and a less-flattering Trump persona is created. Neruda is a terrific film by itself but I can’t help giving it bonus points because, at this moment in American history, it’s fun to see a film about an artist irritating the hell out of fascist tools.