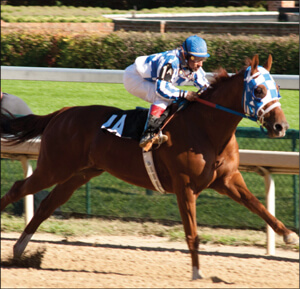 Although directed at no specific group, Secretariat may represent some form of hate crime. As unintentionally hilarious as The Happening, as hideously filmed as a flip-camera video taken on a roller coaster ride in the dark, as horribly acted as a community theater musical starring meth addicts, any compliment the film is given is a lie told by a lying liar. If screenwriter Mike Rich hadn’t already punched his reservation for eternal hellfire and damnation after his last script, besmirching Jesus’ origins with The Nativity Story, Secretariat would have guaranteed him a seat on that southbound train. Such awful things were done to words that someone should make the English language point on a doll to show where the bad man touched it. The relentless torrent of stupidity begins with an unintelligible and confusing quotation that may have been from the bible, presumably selected because someone noticed it had the word horse in it. We’re introduced to Penny Chenery (Diane Lane) as she drops a bowl with food in it at the shock of hearing her mother has died because that’s this film’s idea of a subtle and dramatic moment. Laughter probably wasn’t the response director Randall Wallace wanted during that scene and the following funeral, but he’s going to have to get used to disappointment. Because her father (Scott Glenn) has dementia — again, probably not supposed to be funny, but it is — Penny takes over the family’s farm and horse operation, aided only by kindly caretaker Miss Ham (Margo Martindale) and Eddie Sweat (Nelsan Ellis), who we’re told “can hear horses’ thoughts through his hands.” Yeppers, that’s an actual line of dialogue. Although her husband (Dylan Walsh) and brother (Dylan Baker) want to sell the estate, Penny refuses and hires trainer Lucien Laurin (John Malkovich) immediately after she acquires the titular horse. Then said horse runs really fast and wins a whole lot of stuff while a bunch of humans pat themselves on the back and speak like they live inside a Hallmark card. Although every character in the movie directly states that Penny is spunky and fiery, as if saying it makes it so, Lane strikes with all the fury of a wet cotton ball, barely raising her butterfly voice and mostly looking constipated. If Lane’s family loves her, they’ll never speak of this performance again. Malkovich tries hard, seemingly just satisfied he’s not starring in Eragon 2. Secretariat manages to do nothing right. Absolutely nothing. It does not paint a compelling portrait of the horse or its owner, it fails to provide context for the remarkable achievements, it half-asses the inclusion of social and political movements of the late ’60s and ’70s and it simply shouldn’t exist. If you want to know more about Secretariat, read a book or use the Internet. If you want to savor all the enjoyment of a car crash without the lasting bodily harm, you’ve been appropriately warned. If they euthanize lame racehorses, one can only imagine what they should do with this movie. GRADE: F