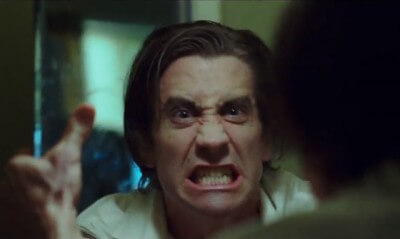 Beyond the indictment of journalism in service of voyeuristic pleasure, Nightcrawler is a stunning thriller with a career-defining performance from Jake Gyllenhaal (sorry, Bubble Boy). Louis Bloom (Gyllenhaal) is part Patrick Bateman, part Jordan Belfort. He is a sociopath with laser focus, a monster completely in control of himself. He is terrifying and you cannot look away from him.

The film wastes no time in telling us that we are to despise this man, who will do whatever he needs to in order to succeed. He is harassed by a security guard as he is stealing copper and wire, sees that the guard has a nice watch and beats him and takes it. It takes all of one minute for Louis to bare his teeth and declare himself a predator. When he sells the stolen goods to a construction manager, he also tries to sell himself, asking for a job…any job. When he’s turned down, he drives home and stumbles upon a fiery wreck and sees camera men filming the carnage.

Louis has found his calling: visually feasting on the carcass of tragedy. He makes a connection with a local TV producer, Nina (Rene Russo), who tells him the specific type of horrifying shots she wants: white suburban victims. So Louis coaxes a broke drifter, Rick (Riz Ahmed), into being his copilot, helping him navigate the streets at night, using a police scanner to chase down the goriest crimes as fast as they can. The more successful Louis gets, the more dangerous he becomes, leading to a thrilling final 45 minutes that are as tense as any imaginable.

Gyllenhaal is visual fly paper here. Bug-eyed and floppy haired, you can’t stop looking at him, contemplating him. He’s not a serial killer or sexual assailant; he’s the twisted endpoint of the American Dream. He’s ruthless capitalism in the flesh, unconcerned with how many dead bodies he must step on to reach the next rung in the ladder. Russo is also amazing as the type of character most stories don’t consider: she’s a smart, grizzled woman on the back end of her career, willing to compromise her integrity for one last go.

Writer/director Dan Gilroy has made something remarkable. Much like the work of Joon-ho Bong, Nightcrawler bends genres. In its darkest moments, it is sometimes intentionally funny. Its scathing criticism of this type of media and its audience flips between satire and violent condemnation over and over again. Beyond all of that, the film simply sizzles, racing towards the conclusion like Louis after his next story. Nightcrawler is an audacious mainstream thriller, a bombastic character study and a hell of a first movie for Gilroy, even if it’s a little terrifying to think of what characters he will dream up next.