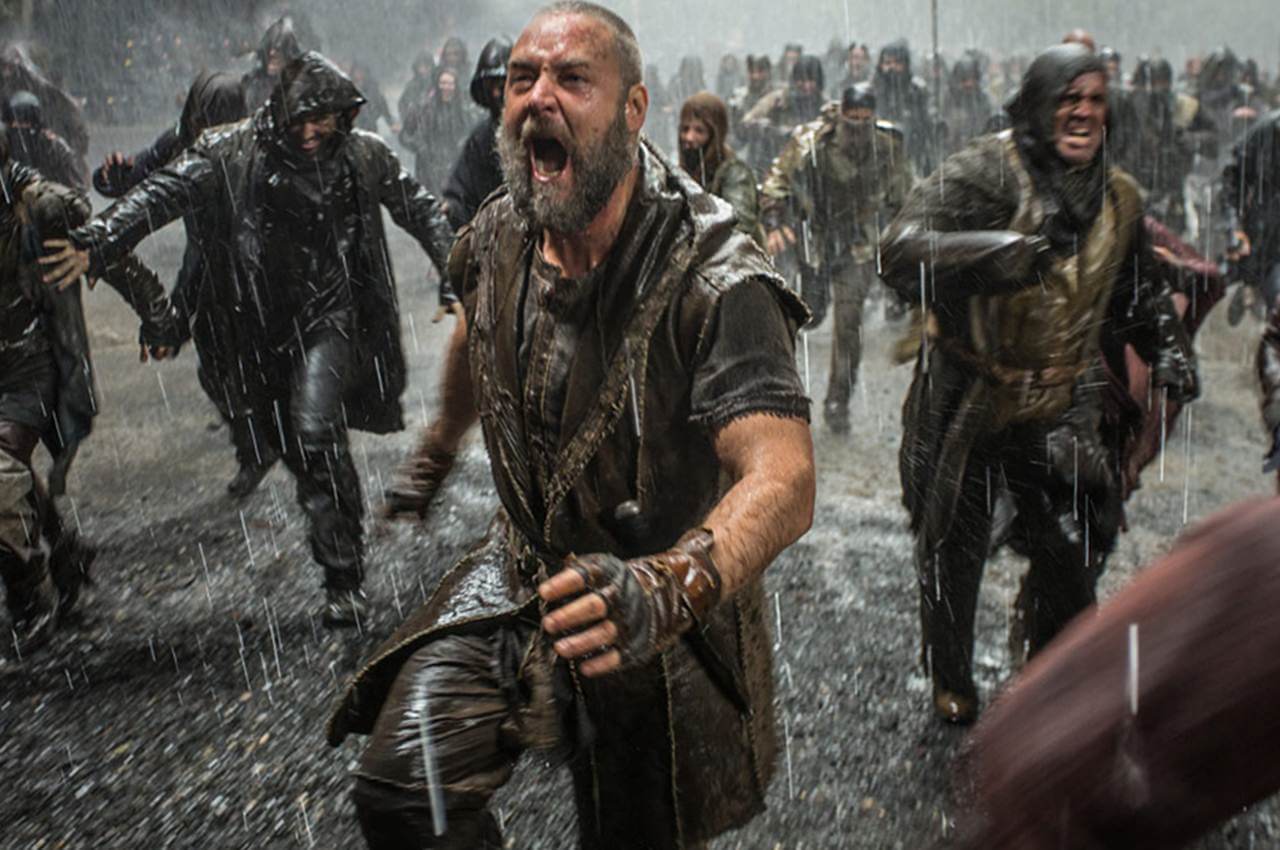 They gave the guy who made Requiem for a Dream $150 million to make a movie about Noah’s ark. Huh?! In Requiem, writer/director Darren Aronofsky had Jennifer Connelly connect with another woman via an unforgettable shared “experience.” So, if any exec at Paramount claims they didn’t think Noah would end up like this, they are real dumb.

It takes all of five minutes for Noah to deliver a Dikembe Mutombo-like swat to expectations of Sunday school bible study. Six-armed, rock-encrusted, giant fallen angels help humans to build thriving cities on a Pangaea-era earth that looks like an alien planet. This is the Book of Genesis by way of Middle Earth. That’s not an accident. While respectful, from the jump, Aronofsky lathers his interpretation with the visual language of mythology and fantasy.

The epic prologue establishes that the descendents of the murderer Cain have spread like a disease, devouring the earth’s resources with vile glee. Only Noah (Russell Crowe), the descendent of Cain and Abel’s lesser known brother (Seth), strives to live in accordance with God’s will. That gets harder for him when he’s instructed to build a boat, gather two of each animal and watch all of humanity drown. Actually, God doesn’t surf a cloud to earth and say “Hey, buddy; here’s the plan.” Noah interprets visions that are somewhat unclear.

So you’d think Noah’s wife, Naameh (Jennifer Connelly), would have some questions, but na’ah. She does tell Noah’s grandpappy, Methuselah (Anthony Hopkins), that she wishes her son, Shem (Douglas Booth), could get his barren wife, Ila (Emma Watson), preggers in order to continue the human race. At least Shem gets a wife. You think your “middle child” experience sucks? Noah named his second son after lunchmeat—Ham (Logan Lerman)—and won’t let him take a partner onto the ark. Thus, Ham gets tempted by the “man takes what he wants” philosophy of Tubal-cain (Ray Winstone), the leader of the sinners God is about to ixnay. This sets up a cray-cray final act in which Noah actually becomes the villain.

They showed this to church groups. Ha! The studio went to churches and showed devoted followers a movie in which the “hero” contemplates baby murder. Man, those test screening comments have to be so entertaining. This isn’t to say Aronofsky is disrespectful; he isn’t. Redemption comes for all but the unrepentant wicked, and the moral of the parable remains intact. Aronofsky simply focuses on the most uncomfortable idea: following God’s will meant Noah was a partner in global genocide.

Crowe masterfully crumbles beneath that unquantifiable moral weight, while Watson and Connelly do their best to match him. In the midst of asking the deepest religious/philosophical questions, Aronofsky somehow squeezes in a history of reality from nothingness to present day and whips up a tense final hour in which one life may mean more than the millions killed in previous scenes. Noah is gorgeous, chilling and challenging and, as such, is destined to part audiences like Moses and the Red Sea.