Home » Film » Got Your Nose 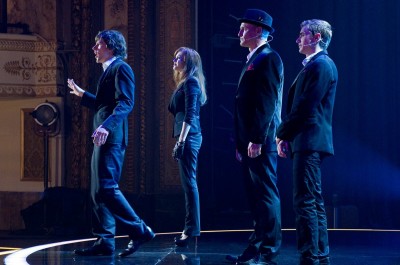 Of the myriad of tricks pulled by magicians in Now You See Me, the least believable is attempted by Ed Solomon, Boaz Yakin and Edward Ricourt’s script: No one can suspend disbelief enough to accept that Jesse Eisenberg would reject Isla Fisher or call her fat. No one.

Much like a lust-struck partner in a terrible relationship, director Louis Leterrier’s film is all about denying reality for pleasure. Magicians J. Daniel Atlas (Eisenberg), Henley Reeves (Fisher), Jack Wilder (Dave Franco) and Merrit McKinney (Woody Harrelson) are called together by a mysterious fifth party and entrusted with blueprints and instructions for an unparalleled series of illusions. Mostly, the illusions are unparalleled because they aren’t so much sleight of hand as they are crimes. The quartet steals millions from a bank, plunders the account of insurance mogul Arthur Tressler (Michael Caine) and taunts Thaddeus Bradley (Morgan Freeman), a former magician who turned his back on the brotherhood by getting rich exposing how tricks are done.

Turns out, if you steal millions from a French bank, you run afoul of all sorts of legal organizations. FBI Agent Dylan Rhodes (Mark Ruffalo) and Interpol Agent Alma Dray (Mélanie Laurent) are forced to team up to take the gang down. Their union is supposed to be wrought with sexual tension, but it’s easier to dream up a scenario where the nameless G-man played by rapper Common would have had more chemistry with Laurent…or Ruffalo…

Now You See Me wants so very badly to be clever. So much so that it is discontent simply being fun. As such, it overreaches a bit, shoehorning in an absolutely bogus and boneheaded secret society and a “twist ending” with less suspense than a game of peekaboo. In its attempt to outthink its audience, it overthinks its strategy, jettisoning the most dynamic and interesting characters (the ones played by Eisenberg, Fisher and Harrelson) in favor for the least (Freeman’s, Ruffalo’s and Laurent’s).

The worst sin, perhaps, is the failure to follow proper “video game boss” formula. This algorithm dictates that there needs to be an ascending degree of impressiveness in threat levels. In this case, each of the “Four Horseman” shows gets less impressive than the last, culminating in a final performance that lasts all of four seconds. After that, it’s right to a lengthy series of explanations for audiences who need their food cut up for them.

With a cast this dynamic, you almost can’t make a movie fail. Now You See Me is one Franco away from being flawlessly acted. Combine this with Leterrier’s need to keep the camera in perpetual motion, and you have a thematically appropriate series of distractions that prevent you from realizing nothing really works together all the way. If there’s a sequel to this, and early returns suggest there may be, here’s hoping the creative team goes whole hog, amping up the stakes on the trickeration and embracing the first silly secret society to make the Freemasons seem practical.