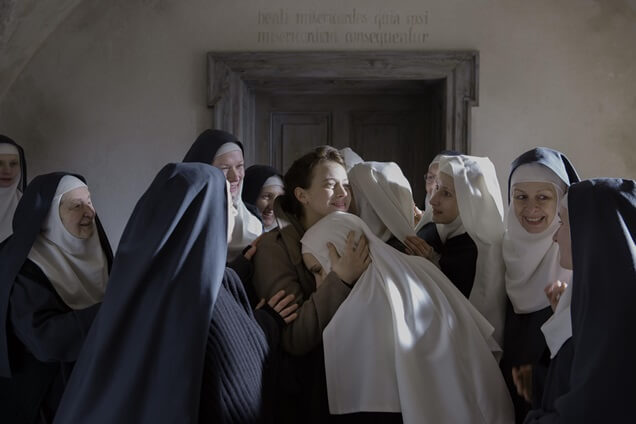 The Innocents is a perfect film and, so far, the second-best film of 2016 for me. It’s runtime approaches two hours in length, but I didn’t spot a single misplaced moment. Somewhat refreshingly, The Innocents avoids all of the themes that we expect to see in a story about devoutly religious people living under brutal circumstances. It doesn’t try to make any grand statements about faith…because it doesn’t need to. Directed by Anne Fontaine, The Innocents is a stark, straightforward story told with elegant simplicity.

The film opens in Poland, soon enough after World War II that survivors of the German concentration camps are still being nursed back to health. It’s winter, and the freezing, snow-covered rural landscape feels like a costar in the film. The cinematography by Caroline Champetier isn’t just beautiful for the sake of looking beautiful. Every image looks precisely as it must. I kept thinking about how, in worse films, so many shots throughout The Innocents might have seemed “stagey.” Fontaine and Champetier collaborate so well that they refuse to let that happen—not even once.

Eventually, the painful screams of a young woman can be heard coming from somewhere in an isolated convent. A concerned nun, Maria (Agata Buzek), decides to break rank and seeks help of a nearby French Red Cross doctor. Mathilde (Lou de Laage), the doctor, is reluctant to help, but her conscience prevents her from turning the nun away. Mathilde arrives at the convent to discover that the nuns are hiding a pregnant young woman who was disowned by her family. The doctor agrees to treat the woman in secret, but it’s not long before she makes a horrific discovery.

Soviet soldiers raped nearly every nun at the convent, and many of the women are pregnant. If it seems like I revealed a lot, you might be astonished to know that’s just where the story begins. Based on actual events, The Innocents is about harsh decisions made in response to harsh realities. The film unfolds with a distinct matter-of-factness. We see many nuns experience a crisis of faith, but the film doesn’t scrutinize them too closely. It’s just another harsh reality.

Featuring a cast of almost entirely women, and women in almost every major production role, The Innocents is an original perspective on post-World War II drama. Even the one prominent male character in the film feels like a type of man we don’t usually get to see in the genre. Admittedly, I had absolutely no desire to see The Innocents. The trailer I kept seeing made the film look, quite frankly, bad. Surprisingly, I walked out of the film with a big goofy smile on my face. Despite the soul-crushing drama, I knew that I had just watched an A+ film.

I haven’t been shy about complaining that 2016 has been the worst year for new films in my lifetime. The Innocents is the type of film that almost single-handedly makes up for it.