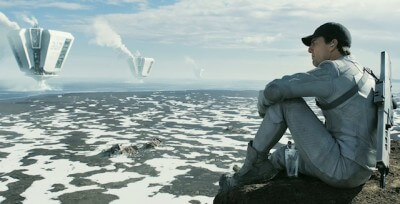 If you conceived a child back when Tom Cruise jumped on Oprah’s couch, it would now be old enough to tell you to move on. Despite welcoming back rapists and murderers when they win a Super Bowl, modern society seems intent on grudge-holding against a guy who, at worst, is a weird idiot. Oblivion is still being written into a “comeback narrative” that those with a brain stopped furthering after Mission Impossible: Ghost Protocol became his highest grossing film ever worldwide. It is an attempt to make Oblivion significant somehow when it most certainly isn’t. And that’s a good thing.

Oblivion is old-school, hard sci-fi prechewed for audience digestion. It’s not Matrix-heavy with innovation or District 9-dense with allegorical suggestion. It’s just a clever conceit executed crisply and cleanly by an actor who can sell the absolute crap out of the worst lines of dialogue ever written. At one point, he whispers “Dream of us” and it didn’t result in mass projectile vomiting, which is a testimony to his unspeakable charisma.

The film is set in the year 2077. Earth is a wasteland, because even sci-fi writers can’t conceive of a scenario in which we don’t completely screw the planet up. This time, it’s not our fault: it’s them durn aliens again! They showed up, so we fought them and accidentally ruined the planet, which seems about right. What’s left of the human race has moved to Titan, Saturn’s largest moon. Well, everyone but Jack (Cruise) and Victoria (Andrea Riseborough).

Huge machines are sucking up the ocean because of…um, science reasons…and Jack’s job is to protect the equipment from the leftover aliens, called “scavs” which is short for “scavengers.” The only thing protecting the ocean-suckers are flying mechanical drones (“thanks, Obama !”). But the couple has been promised that, in just two weeks, they get to stop playing earth janitor and reunite with humanity. But then a ship with a mysterious cargo crashes and Jack suddenly finds himself fighting against the very drones he once fixed. It’s a twist!

Jokes aside, the plot maneuvers largely work, to the point where you’ll notice Morgan Freeman’s name missing above. This isn’t just Cruise’s ability to force an action-adventurer forwarded using only his will and toothy grin; the script from Karl Gajdusek, Michael Arndt and director Joseph Kosinski is the perfect degree of semi-serious. Sure it almost pretzels itself trying to reveal the intricacies of the happenings, but it rarely overstates its case. The love story isn’t somehow epic, the stakes aren’t explicitly huge and the final sequence is basically a smarter version of Independence Day, so it’s only kinda stupid.

Like a porcupine playing volleyball with a balloon, it’s easy to poke holes in Oblivion but it’s still fun to watch. Cruise’s got his swagger back, the sci-fi isn’t SyFy and it looks real pretty (and that’s not just costar Olga Kurylenko). In a time of year when Scary Movie 5 gets a wide release, cling to Oblivion’s entertainment like you cling to bashing Cruise’s foibles.