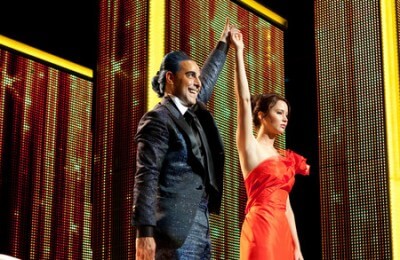 Proving that young adult fiction primarily targeting females need not always pander to base hormonal desires nor plant the seed that it’s okay for creepy boys to stalk girls so long as they’re cute, Suzanne Collins “Hunger Games” trilogy set itself apart from other such series by being, you know, good.

Because she had a hand in the screenplay, it’s no wonder that the best of Collins’ novel made it to the big screen, as director Gary Ross’ The Hunger Games is at once a meditation on a Marxist nightmare, a tense dystopian sci-fi metaphor and a further investigation into a heroine who displays the ability to do more than wait around for boys to decide if they like her. Although it’s one of the few blockbusters to pass the Bechdel Test, which it does in its first five minutes, viewers of any gender should be riveted by a film that manages to repurpose familiar themes and tropes into a spectacular package that says more about us than some may think.

Squint and you’ll see familiar statistics: The Hunger Games carries the long division of the 99% (the Occupy Wall Streeters, or “have nots”) and the 1% (the wealthy elite) into a hyperbolic future. In the ruins of what was North America, 12 districts filled with impoverished workers responsible for producing a regionally unique good or service are controlled by the government of Panem. To keep the poor in their place, each year a boy and a girl between the ages of 13 and 18 are chosen from each district to fight to the death until there is only one left. Why children? Because revolutions are most often birthed in the fertile wombs of the young (see The Arab Spring for proof); so what better way to remind a group who inherently feel immortal that they are anything but?

When her 13-year-old sister, Prim (Willow Shields), loses the lottery and is drafted into the 74th annual Hunger Games, Katniss Everdeen (Jennifer Lawrence) volunteers to take her place. She and Peeta (Josh Hutcherson), the boy chosen from her district, are whisked away by the cartoonish escort Effie (Elizabeth Banks) to the lavish-for-lavish’s sake capital city. Unlike the drab, “1984”-inspired look of the districts, the home of the elite is awash in Crayola colors, a place where residents don’t have to worry about starvation, so they can spend time trimming their beards into goofy-ass shapes.

Katniss and Peeta are semi-trained by Haymitch (Woody Harrelson), a former Hunger Games champion turned champion drunk, and are groomed by fashionista Cinna (Lenny Kravitz) for interviews with the Seussian-styled, Ryan Seacrest-inspired Caesar Flickerman (Stanley Tucci). But a strange thing happens on the way to the teenage murder Olympics, as President Snow (Donald Sutherland) warns the man in charge of running the games, Seneca Crane (Wes Bentley), that Katness seems to be sparking an accidental insurgency among the rabble.

The challenge of conveying the complexity of the character unveiled in Collins’ superbly written first-person novel seems almost too easy for Lawrence. She has an alchemist’s tongue, spinning the most mundane and potentially cheesy dialogue into pure gold. Forced to express a cornucopia of emotions with only facial expressions, Lawrence is perfection, virtually ending any debate regarding who is the most talented young actress with a metaphorical arrow to the gullet. Hutcherson does not fare as well, Pinocchio-ing his way into “wooden boy” status, but the rest of the supporting cast appropriately does fine yeomen’s work.

In highly technical film theory speak: Ross straight-up kills it, yo. From the grainy, slightly out-of-focus views of the district to the fact that not one of the deaths elicits cheers from the audience, not even those of seemingly sadistic villains, it is a masterwork in how not to biff up an adaptation. Whereas Twilight is inartful weeping and gnashing of teeth, forlorn love is shown here in longing glances at horizons that used to hold promise. For a film with such brutality, Ross doesn’t manhandle a single scene.

Are there quibbles and kvetches that loyalists of the novels could levy? Sure. But the big ticket items are all crossed off: it’s meaningful and brutal, it’s captivating and empowering and it’s got one hell of a memorable heroine. So when someone endeavors to poo-poo The Hunger Games, dismissing it to the bin where Stephenie Meyer’s tripe belongs, drop some knowledge on them. The Hunger Games is sophisticated. It features a fictional central city that takes its name from the Latin expression “panem et circenses,” which literally translates to “bread and circuses” and is a reference to suppressing the general public by satisfying immediate, base desires. Meanwhile, Twilight features a werewolf who falls in love with a newborn baby. Not all source material is created equal.