Home » Film » You Should Mount Olympus 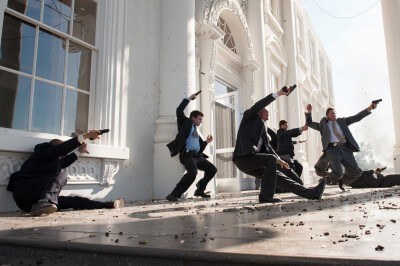 The only explanation that makes sense for the existence of Olympus Has Fallen is that someone found a 1990s action movie on VHS underneath Joel Silver’s bed and paid to have Gerard Butler digitally transposed over Steven Segal. The Die Hard franchise may be hiking up its skirt and whoring its nostalgia, but look no further than this blathering gibberish for a genuine blast from the past; it hails from a time when men were monosyllabic, women were senselessly killed off to motivate dude anger and the bad guy’s nationality mattered less than how creatively he would be killed.

The Internet says that Creighton Rothenberger and Katrin Benedikt wrote the screenplay, but it’s lying. The only way it would take two people to write this is they were stroke victims and one could only write nouns and the other could only write verbs. Director Antoine Fuqua, simultaneously a maestro of schlock action and the director responsible for Denzel Washington’s sole Best Actor Oscar, completely understood his role and this film’s merit: create a visceral adult cartoon, where physics are mere suggestions and “characterization” is the hero grimacing when he shoves his fingers through a villain’s eye socket.

Butler plays Mike Banning, the most overqualified Secret Serviceman in the history of ever. He can defeat North Korea with a Bic lighter, but the government thought he’d be best used as a glorified chaperone. When he heroically saves President Asher (Aaron Eckhart), he gets fired for reasons you need to ask Ashley Judd about. Luckily, when a terrorist cell descends upon the White House, he’s available.

While the evil Kang (Rick Yune) tortures forgotten Oscar-winner Melissa Leo, who plays the Secretary of Defense, the Speaker of the House (Morgan Freeman) and the Secret Service Director (Angela Bassett) talk on the phone to Banning, who’s polite enough to call even while busy murdering. Faster than you can say “Is that Dylan McDermott or Dermot Mulroney,” this lone warrior is shoving knives into brains for America. The film is one more shot of a tattered flag from being a Toby Keith song.

Dumb, dumb, dumb. Dumb everywhere. From blatantly silly dialogue to the fact that the movie never clarifies the true identity or intent of the villain, this feels is like a college student on Spring Break guarding its last functioning brain cell. And thank God! Yes, thank God it is so stupid nobody can take it seriously and fetishize the villain (like Ledger’s Joker). The NRA’s adorable assertion that somehow movies are more dangerous than actual firearms has increased the scrutiny on fictional violence; because it’s that or having to tell billionaire gun company CEOs “no.” Olympus Has Fallen is glorious because in its resplendent stupidity. It is a live-action “Tom and Jerry” cartoon with some marginally famous people in it. It is meaningless, insignificant fun so grounded in fantasy nobody would dare ape it. In short, it is a guilty pleasure enjoyed with a clean conscience.