Home » Film » One Plus One Equals One 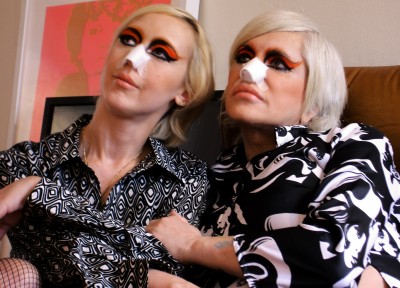 Well, in their ideal scenario, the union would create a sort of pandrogynous third being; a joint identity that, as they readily admit, is as much an art project as a function of their undying love for one another. This is the basic scenario, although not really the meat, of Marie Losier’s documentary The Ballad of Genesis and Lady Jaye, which finds our titular subjects en route to that dream and, therefore, still in the middle of the plastic surgeries that aim to make the two of them physically identical.

Both got breast implants, both had facial surgeries, each got each other’s tattoos, and so on. And by the time we meet Genesis P-Orridge and his wife Jacqueline Breyer (aka Lady Jaye), they look similar enough for us to get the idea pretty quickly but still individual enough to produce a pretty eerie effect.

The focus of the picture, though, is Genesis’ life and career to-date. Old photos and his own bitter reminiscences take us through his rough childhood, controversial debut in the London art world and eventual rise to the seminal figure he is today (at least in the eyes of a specific breed of music cultist, that is).

Losier is best known as an experimental filmmaker, and this Ballad is her first proper feature. But with its intensely intimate style, where footage is sewn together under a similarly stream-of-consciousness narration, which comes almost exclusively from Genesis, it feels as if her subject had made it himself. Which has a lot to do with why Lady Jaye, who seems at least as intriguing as her husband, is almost always admired from and kept at a distance. By the end, we’ve learned quite a lot about P-Orridge, and a fair amount about industrial music, but relatively little about Lady Jaye.

Obviously, this is essential viewing for P-Orridge fans. But Genesis and Lady Jaye is overflowing with enough punk ephemera and intrepid film craft to interest anyone willing to go along with these two extraordinary identity adventurers.