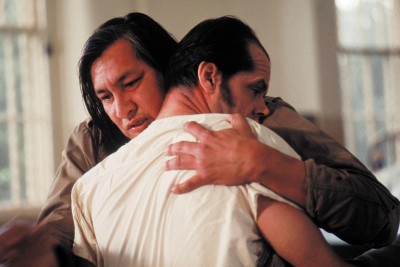 “And then the big Native American smothers him to death with a pillow after he sees that he’s been lobotomized! Wait, Mr. Producer! Where are you going?”

Pitching One Flew Over the Cuckoo’s Nest in an era of careful demographic selection and test audience input on filmmaking would ensure somebody would be going to an asylum. There’s no arguing that the ending, if not the whole film, would be softened today. Instead of an “emotional nut punch” ending, the producers would point to Q ratings and surveys and end the movie with the inmates discussing whether or not McMurphy escaped or was tamed. Actually, that would be the producer’s compromise, preferring instead to have the antihero knock down a wall and set all his “mental defect” friends free.

Watching director Milos Forman’s lauded masterpiece again is always rewarding, especially if you can cut through the cultural chaff of what we’ve done to the characters. Nurse Ratched (Louise Fletcher) has become the butt of pop culture jokes, her name shorthand for abusive medical professionals. Only, she’s not abusive. Not the least bit. In fact, she’s not even oppressive, opting out of a dictatorial decree against letting the patients watch the World Series in favor of a democratic process. She hides their cigarettes only so McMurphy won’t win them, defends playing music because for some old men it’s the highlight of their day and says she’s going to tell Billy’s mom about his fornication out of a sense of duty.

This isn’t a revolutionary reading by any means, but it is a testimony to Forman’s fairness. Knowing that Nicholson is among the most magnetic performers, tipping the scale an iota against Ratched would have audiences hyperventilating with rage. You root for McMurphy’s wild destructiveness because of his rampant humanity. There can be no question that his thirst for female flesh, love of those around him and desire to be spontaneous borrows bits from Nicholson’s own, now well-documented, persona. So you root for a criminal against a nurse. You root for a con man against those dedicated to helping others. You root for a man who provided drugs and alcohol to men determined to kill themselves from the inside out.

The unparalleled supporting cast (Danny DeVito, Christopher Lloyd and even Scatman Crothers) play men stripped of reason, relying solely on their “gut” to tell them McMurphy is messiah. A simplistic part of us recognizes humanity’s existence is, in some ways, in opposition to all logic and order, to routine and mechanical living. So if the film is a choice between two extremes, safe order and dangerous spontaneity, it is only human to side with the latter. Of course we buy it.

Some “masterpieces” don’t hold up well, others grow each time they’re seen. One Flew Over the Cuckoo’s Nest does neither. It remains the same gobstopping display of acting prowess caged inside a tragic tale of what happens to those of us who listen too much to the animal inside us it’s always been.