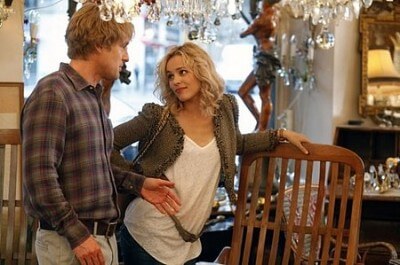 The rosy-hued vision we often have of that always-intangible past is a fitting subject for Woody Allen, a director with a large segment of fans who pine for the kind of movies he made during his own vaguely defined “golden age.” His new picture, Midnight in Paris , is about a man with a similarly frustrated relationship with the present, and despite its handful of problems, it ranks among his most easily enjoyable movies in the last few years.

Owen Wilson stars as Gil, a well-paid Hollywood screenwriter who wishes he were a TB-ridden poet living alongside the Parisian luminaries of the 1920s. His confused, romantic’s idea of integrity is lost on his fiancee, Inez (Rachel McAdams), who has brought him along for a visit to the French capitol.

While she’s out dancing with her irritating intellectual buddy Paul (Michael Sheen), Gil walks the Paris streets, looking for just a hint of his idealized city of the past. Amazingly, while he’s loitering around, the clock strikes midnight, and he finds exactly what he’s been dreaming.

It’s a perfect Paris that he wanders into, one where Hemingway (Corey Stoll) and Gertrude Stein (Kathy Bates) are happy to help with his in-progress novel, and Dali (Adrien Brody) and Luis Buñuel (Adrien de Van) are eager to listen to his girl problems. Along the way, he manages to get involved with a girl named Adriana (Marion Cotillard), who has recently broken things off with Picasso (Marcial Di Fonzo Bo).

Wilson’s Gil is refreshingly sweet and harmless; he is emotionally confused and politely unfulfilled but never the shrill neurotic found in most of Allen’s older work. In some of Wilson’s quieter moments with Cotillard, aided by cinematographer Darius Khondji’s remarkable photography, Allen is able to create a truly haunting nostalgic air.

Even though the high points are so right, the ideas still feel underexplored. Gil’s journey is wrapped up a little too cleanly at the end, and his epiphanies feel rushed and unearned. Both Adriana and Inez are underdeveloped, which is surprising, because Allen has actually written good female characters a few times before.

Midnight in Paris seems to have been created mostly as a way for Woody to serve up all those literary and artistic cameos. Not necessarily a bad thing because they’re fun and surprising enough to warrant a ticket purchase. It’s just too bad the rest of the picture wasn’t as inspired.